The 2022 Summit Racing Midwest Drags is, as always, the go-to drag and drive event where both little and big names have an adventure involving three regional dragstrips over four days. This time around, let us check out the latest evolutions of one El Camino hoot.
23 photos

YouTuber Cleetus McFarland is well known for his crazy shenanigans – his latest ideas involved, among others, an off-road barrel race between his Ford F-150 Raptor truck beast and an unsuspecting Subaru WRX Sti. But he is also very much into traditional track action (he owns an entire facility!), the kind where a thoroughly modified car will try to duke it out with other monsters on the quarter-mile.

And, naturally, he does not keep all that for himself. Instead, his vintage Chevy El Camino, a twin-turbo BBC-equipped beast, is involved in all sorts of high-profile events. The latest one is, as you might have guessed, the 2022 Summit Racing Midwest Drags. From there, the videographer behind the Drag Racing and Car Stuff channel on YouTube has prepared yet another enticing feature centered around Cleetus McFarland's Chevy, specifically focused (for now) on the first and third days of racing action.

Well, those who wanted to check out his latest El Camino modifications against a roster of feisty opponents might be a little disappointed. The only traditional quarter-mile drag race is against an old-school, blown rival, and that one ended up being a failed attempt (still, you can easily check it out at the 3:33 mark). On the other hand, McFarland’s twin-turbo BBC El Camino did leave us with lots of mixed feelings.

Negative ones, as many of the solo passes, were actually major duds. But also positive ones because of the difference between those first attempts at the start of footage (at Edgewater Sports Park, the first stop for the June 6th to 10th 2022 edition of the event) and the final ones at Dragway 42 (West Salem, Ohio) is night and day. So, from the many duds of lore, this stunning build ended up lashing out with 7.01s and even 6.99s passes by the end of the footage (from the 4:57 mark). 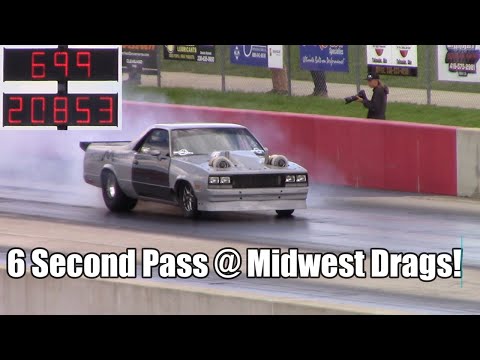