The holiday spirit gets to show off in the most curious ways these days. Just before Christmas, on December 22nd and 23rd, Cleetus McFarland was back for the second annual Christmas Tree Drag Racing World Championship. And every ride had a minimum of requirements.
29 photos

For example, each car was eligible for participation only when equipped with a Christmas Tree that was at least eight feet (2.44 meters) long... and illuminated. Naturally, presents were also allowed... if they could survive the ordeal. Interestingly, some vehicles came thoroughly prepared for the event by default.

The videographer behind the Drag Racing and Car Stuff decided to focus the camera lens on Rick Prospero’s well-known twin-turbo big-block Chevy-swapped Mazda RX-7, which is naturally nicknamed “Green Mamba.” It is not hard to see why: there are very few battles it does not win... and it’s green. So, it was already adhering to the holiday spirit even before complying with the rules of engagement.

As for the competition itself, packed with presents and a tree, the famous RX-7 had no trouble ducking it out with some very cool rides. The first round saw the Mazda (from 1:47) battle with a crimson Corvette for a 7.03s to 8.11s victory. Things got even easier moving forward, with the second round (at 3:16) having another flawless 7.03s performance against a jumping, 8.59s white Mustang.

Round three (from 5.11) saw the quarter-mile battle as an all-JDM affair, with the RX-7 facing off with a twin-turbo MX-5 Miata. That one was not a major challenger (7.15s vs. 8.27s) either, unlike the competitor from the finals. It was none other than Cleetus McFarland’s built Chevy El Camino, which from the 5:40 mark showed its silver force with a subtle wheelie.

Still, that was probably enough to make it lose a few mph and fractions of a second. In the end, Green Mamba established its Christmas Tree drag racing dominance for this edition of the Championship. The victory was a big one (7.1s against 7.38s) also because it delivered the fastest performance, with Rick’s RX-7 reaching almost 202 mph (326 kph) during the feisty run. 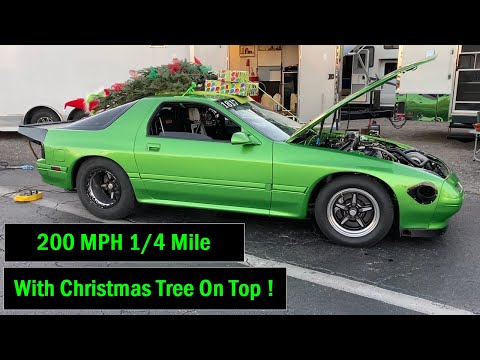