2 Ford Mustang and Jeep SRT8 Seek America vs. Import Glory, It's Not a Close Call

McLaren 47 Rendering Flips Our Perception on AI and Autonomous Cars

Home > News > U-turn
Aurel Niculescu
Because it’s already the end of January, it’s time for another edition of the U.S. Street Nationals at the Bradenton Motorsports Park in Florida. That can only mean some neat surprises are in store for drag racing fans, including some sprinting to the finish line before the official competition even began.
14 photos

The U.S. Street Nationals are scheduled between January 29th and 31st, but of course, most of the racers have been there for a few days already. After all, even these wonderful drag racing monsters need a little bit of fine tuning in advance. And sometimes said fine tuning can be so good that records get (unofficially) broken.

Whenever there’s a craving for all things related to drag racing, one can be sure social media folks such as the ones behind the Drag Racing and Car Stuff channel on YouTube will be right there in the middle of the action to satisfy it.

We have seen many wonderous drag racing achievements through their eyes, from “Latina Driven” Raptors to many instances of the import vs. domestic war or great night-time action. But with the U.S. Street Nationals ready for a great weekend, it’s high time to get serious... at least for about four seconds.

Or even less, something like 3.72 seconds –  that was the time needed by Jason Carter’s legendary twin-turbo 1978 Malibu to wrap up the 1/8-mile time in the pro 275 class, with Mark Micke (as always) at the wheel.

Although the time might be considered a new record, unfortunately the pass (which had a trap speed of 208.9 mph/336.19 kph) won’t be considered official, as it was achieved outside the qualification or elimination rounds.

The test session saw the gorgeous blue Malibu from 1978 (a fourth-generation two-door coupe with a dropped snot) line up against something that might remotely pass as a drag racing/Michael Bay’s Transformers Corvette mix.

Initially, the latter - driven by Chris Daniel and prepared for the class by Pro Line Racing with a ProCharged HEMI engine (!) - had the upper hand, but the blue monster quickly recovered and snatched the win by a hair... posting the 3.72s result against the Corvette’s 3.75 seconds at 200.47 mph (322.62 kph). 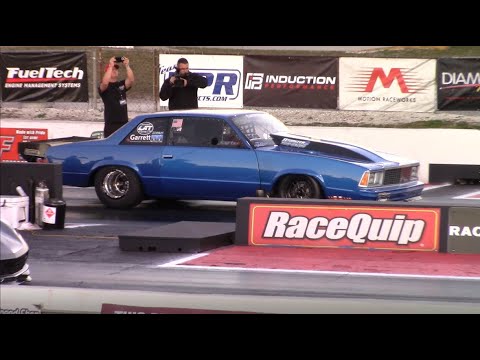