5 Witness a 1969 Ford Mustang Limited Edition 600 Being Returned to Groovy Fame
Car video reviews:
Up Next

Traditionally, when going for a classic car build project, there are two major routes (and a lot of gray sidetracks, but not for today). One can go spellbinding through sheer determination and a stroke of genius, come up with a Pro Touring ‘69 Mustang 427 stroker after countless hours of solo work. But that’s usually the exception. Or, especially when money is of no concern, the classic car goes through a massive upgrade process with help from aftermarket experts.
38 photos

The reason we mentioned the ‘69 Ford Mustang is simple. It serves as the polar opposite to one of its greatest foes, the 1969 Chevrolet Camaro. And the latter is the focus for Hand Built Cars’ latest episode/build project story. There’s no need to have a lot of written information because this time around it’s one of those cases where the imagination of the owner and the expert fabrication shop handiwork speak for themselves.

According to the little details we are being given, this orange-tastic (sprinkled with a touch of menacing) ‘69 Chevy Camaro was reborn into the hands of the professionals behind the Independence, Missouri-based Vintage Fabrication LLC. And it’s easy to imagine this was a no-expenses-spared project based on either the parts that went into its creation or the fact that it belongs to DeWayne Spiess, owner of Monster Construction and creator of Spiess Custom Homes.

As for the Camaro itself, things don’t get way too interesting (initial details concern some of the fabricated parts) until the 2-minute mark when it’s time for the first glimpse of the new heart, just as the car gets ready to enter the paint shop. It comes out of there looking orange and black with a hint of menacing, hence the “Anarchy” nickname. But it’s not just the showstopper's appearance, it’s also about the technical details.

So, go through the final exterior assembly (3:40), engine plus transmission painting (5:15), and the interior (6:55) chapters so we can focus on the big-item list. As such, underneath the body resides a Detroit Speed subframe and a four-link rear, the exterior design is partially custom-made and in part inspired by the 2010 Camaro, while the new engine breaths through a three-inch (7.62 cm) exhaust.

It might seem large enough, but we still wonder. After all, under the hood now resides a twin-turbocharged LS9 engine block (with matching looks for the dashboard and cylinder heads!) and the beast is hooked up to a 4L80 automatic transmission with TCI paddle shifters. 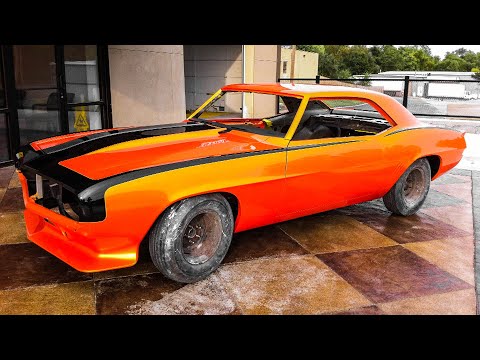