Turbocharged Engines in Formula One 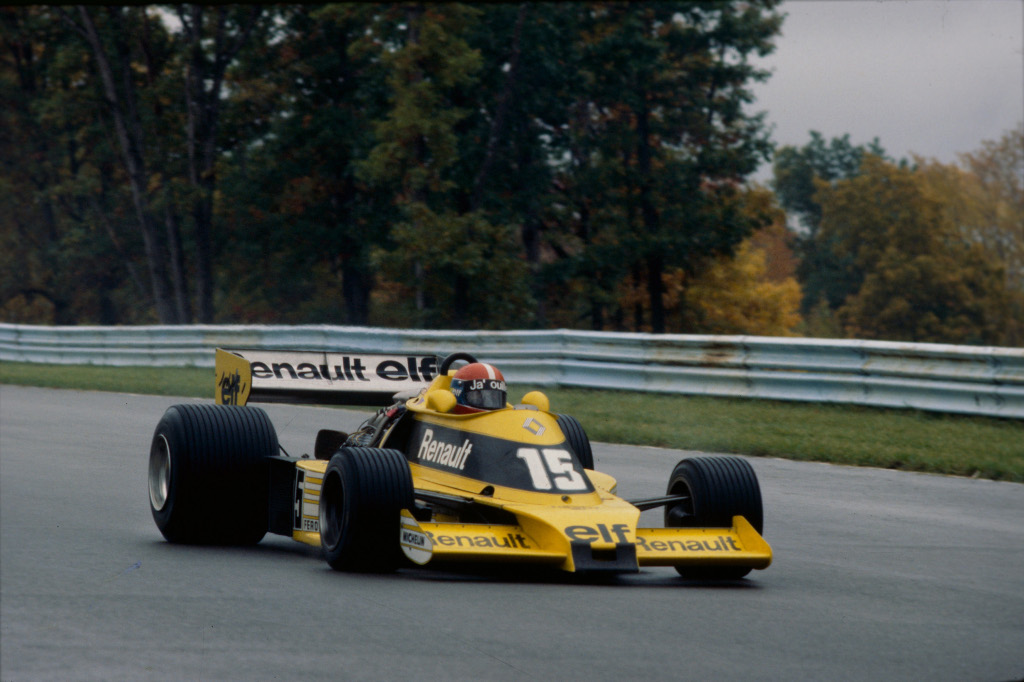 We all know what Formula One cars are capable of nowadays, as there isn't a machine out there that can lap a circuit faster than an F1 single-seater. Obviously, we have to thank the engine suppliers for that, as the V8 engine of an F1 car currently develops some 750 HP (more or less).

The engine freeze introduced by the International Automobile Federation (FIA) in recent years has led to engine development being almost completely scrapped, with the teams being forced to direct their work on improving the aerodynamics. However, this was not always the case in the romantic period of F1 racing, when teams would actually have a choice between either focusing on engine development or put their efforts into finding aerodynamic innovations that would propel them to winning seasons.

The mid-to-late 1970s were characterized by the quest for innovation. All teams were fighting to squeeze the edge over their rivals, being through engine development or through several aerodynamic devices that would improve downforce levels and therefore bring cornering speeds to blistering levels. In an era when Lotus chose the aerodynamic way to climb to the top of the classifications – through their well-known ground effects – French manufacturer Renault made use of another technical rule of the FIA to succeed in the Great Circus: turbocharged engines.

By 1977, the Formula One rulebook stated that the teams were allowed to use either 3.0L naturally aspirated engines or 1.5L supercharged or turbocharged powerplants. So, when Renault had decided they wanted a piece of the pie and stepped into the sport, they made the decision to start off on a brand new turbocharged concept right away.

Like any beginning, the first season was rough to say the least. The first Formula One car that was fitted with a turbocharged engine, namely the Gordini V6 Turbo, was the Renault RS01, during the British Grand Prix. Designed by André de Cortanze and Jean-Pierre Jabouille (driver for the Renault outfit at the time), the new car suffered from constant engine reliability problems through all the races it competed in 1977. As Renault focused their development entirely on the engine, the car's aerodynamics was a mess. When first seen by Ken Tyrrell, the RS01 was nicknamed “the yellow teapot”, which eventually remained the name under which the car was to be known in the history books.

Having its engine block built from cast iron – in order to resist the forces of turbocharging – the powerplant provided a huge turbo lag at the beginning. Unfortunately, when the boost of power was finally triggered, the Michelin tires failed to cope with it. As Jabouille himself admitted in a recent interview “the Michelin tires weren't at all progressive. They had good grip but when they let go, it was very sudden.” Meaning when the huge power boost was created, the tires would wear off very quick and made the car practically undrivable – leading to immense loss of grip.

How did the car do in the 1977 British Grand Prix? “We were in the middle of the pack and at the end of a number laps, what we expected happened: the engine broke with a nice cloud of smoke which made everyone laugh,” remembers Jabouille. 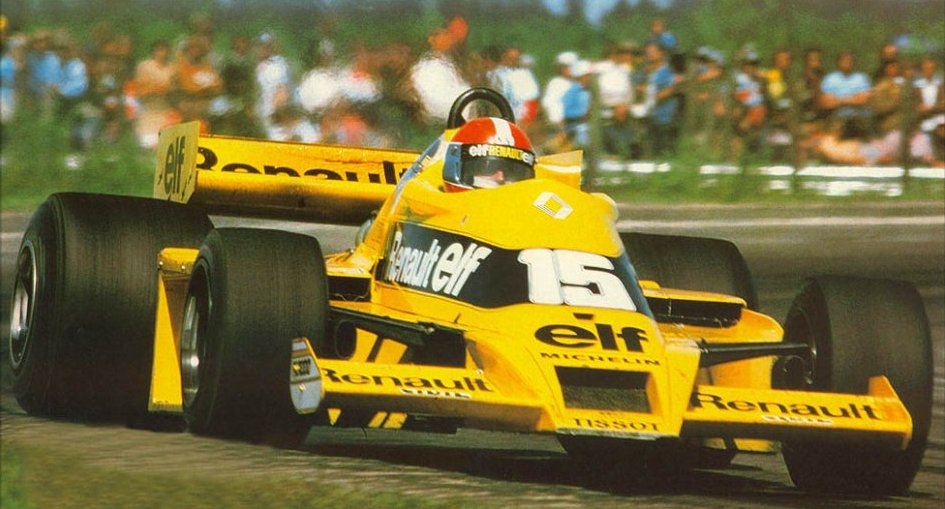 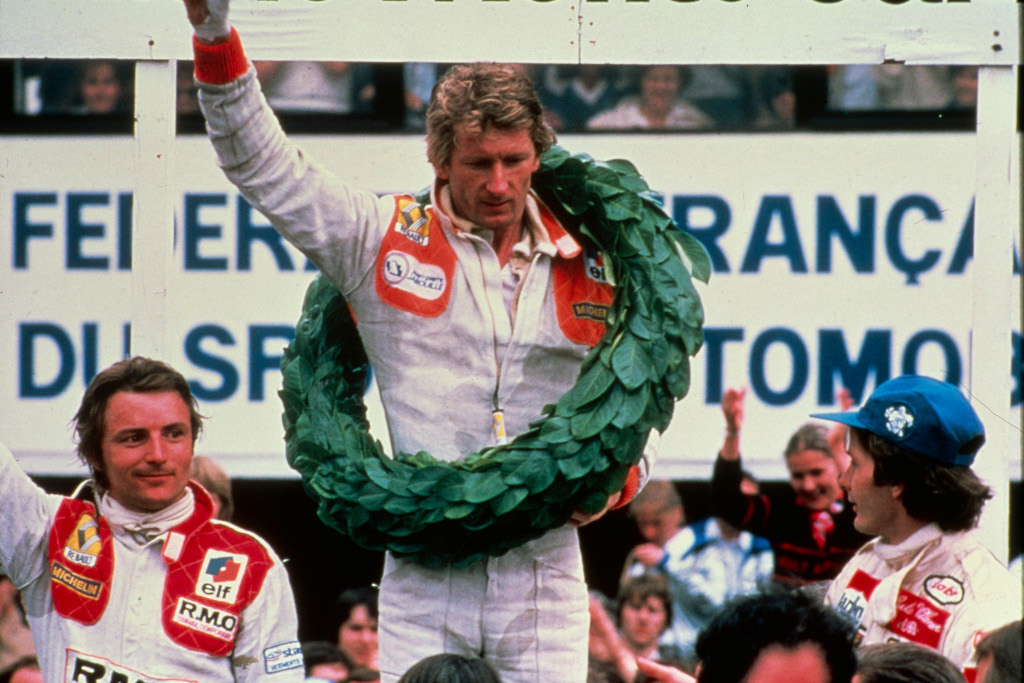 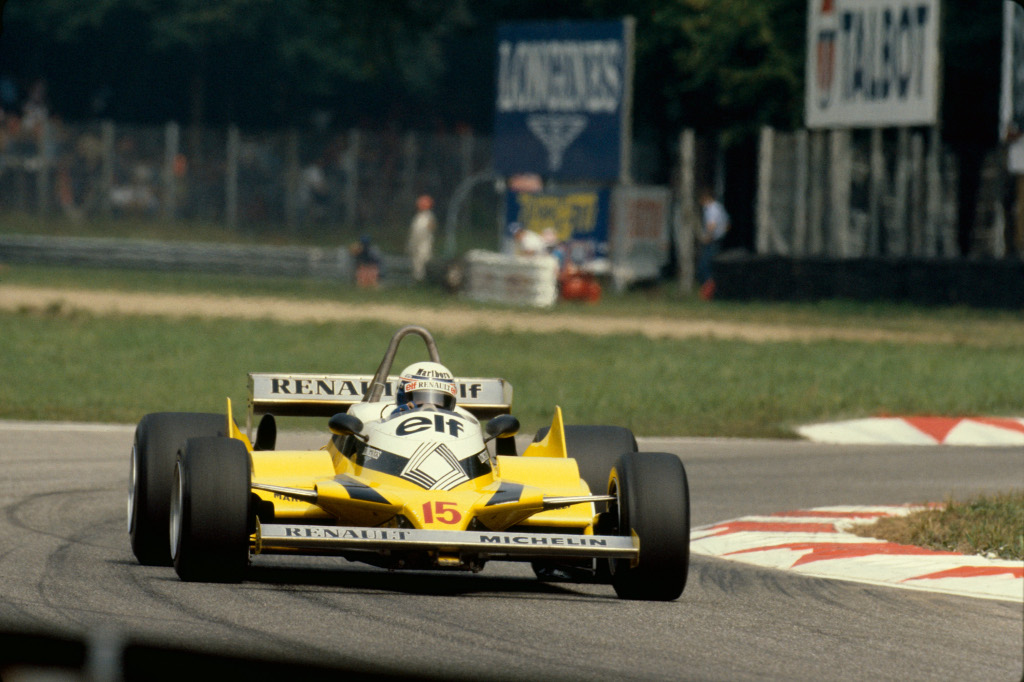 The car would eventually fail to finish the rest of the 7 races on schedule, but the turbocharged solution was kept by Renault for the next season also. As revealed by the Elf Competition Director Francois Guiter, the new engine produced a constant 500 bhp, in an era when naturally aspirated Cosworth powerplants were producing somewhere around 450 bhp. During the 1978 season, the French designers worked heavily on the aerodynamic package of their cars, while also further improving the reliability of their engine by adding twin turbochargers to resolve the turbo lag issues. By the 1978 American Grand Prix, at Watkins Glen, the RS01 had already scored its first ever points in Formula One, through a 4th place managed by Jabouille.

The first race win recorded by Renault's turbocharged powered race car happened only one year after, in 1979, when the same Jabouille crowned himself conquerer of the French Grand Prix after leaving from pole position on the Dijon track. As projected some two years before by the French team, the V6 Turbos held a visible advantage over the naturally aspirated Cosworth engines at high altitude, as Renault had scored their first pole position on a turbo engine a year earlier, during the 1978 South African Grand Prix, at Kyalami (also at high altitude).

In 1981, noticing that Renault's twin-turbocharged engine was becoming more and more efficient and powerful in the series, Ferrari decided to switch to turbo power also. Consequently, they developed their first turbocharged F1 powerplant, which brought the Scuderia their first two wins in 2 years (through Gilles Villeneuve). The Canadian racer took consecutive wins in Monaco and Spain, but other than that Ferrari were unable to match the 3rd placed Renault in the championship. The 1981 season was actually a preparation one for Ferrari, who was tackling the same handling problems encountered by Renault a few years before. 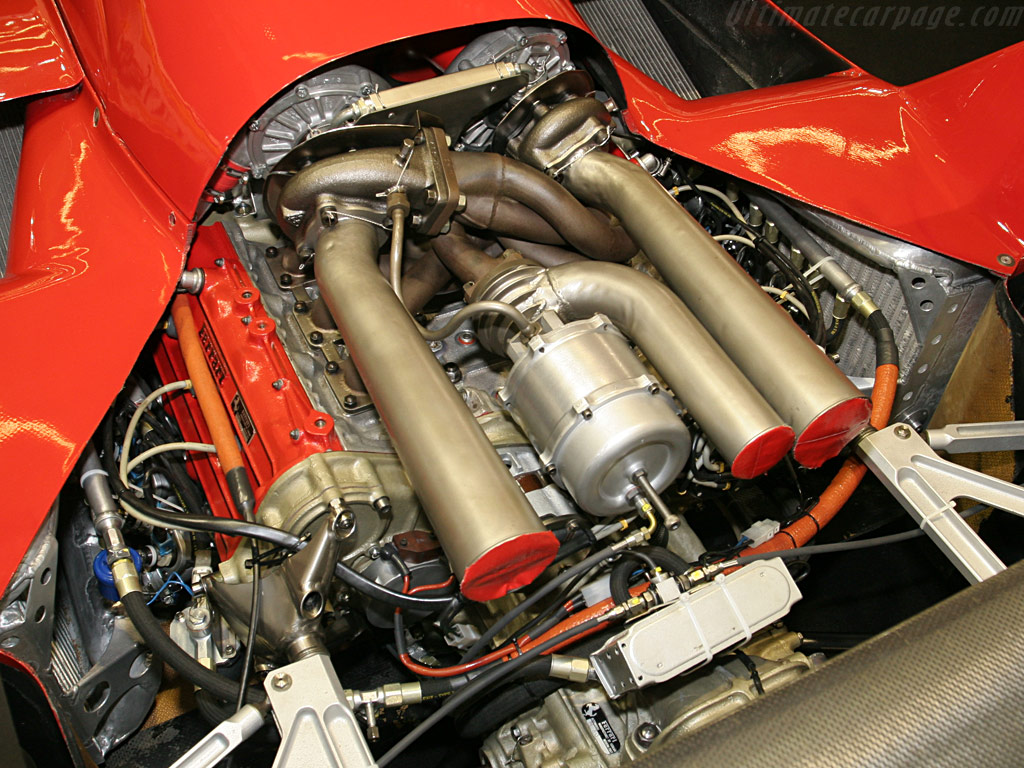 The next campaign Ferrari would go on to dominate the championship, despite Villeneuve's tragic death during the Belgian Grand Prix. Although failing to bring Didier Pironi his first world title, Ferrari became the first ever manufacturer to win a Formula One title on turbo power. By the end of 1982, the turbo engines would produce a power in the vicinity of 700 bhp.

Nevertheless, the teams were still trying to tackle the negative aspects of using turbo units. On technical, twisty circuits, the power boost provided by the 1.5L powerplants would prove useless, because it arrived some serious seconds after the driver had pressed the acceleration pedal. So, unless you'd have a long straight line ahead of you to unleash that power, the turbos' main weapon remained deactivated for the majority of the time.

During the same season, several important F1 teams started pairing with major car manufacturers in order to stand a chance against the title winning Ferrari machineries. Honda, Porsche and BMW therefore made their debut in Formula One, with Williams, McLaren and Brabham respectively.

In 1983, all the major players in the series were using turbocharged units, whereas a few years ago everyone was laughing at them. From the 15 rounds on the Formula One schedule, Tyrrell's Michele Alboreto managed to win a single (and last) race with a normally aspirated powerplant. Needless to say, in a matter of years, the engine power skyrocketed inside the series, reaching an enormous 1300 to 1400 bhp in qualifying and approximately 1100 bhp in the race. 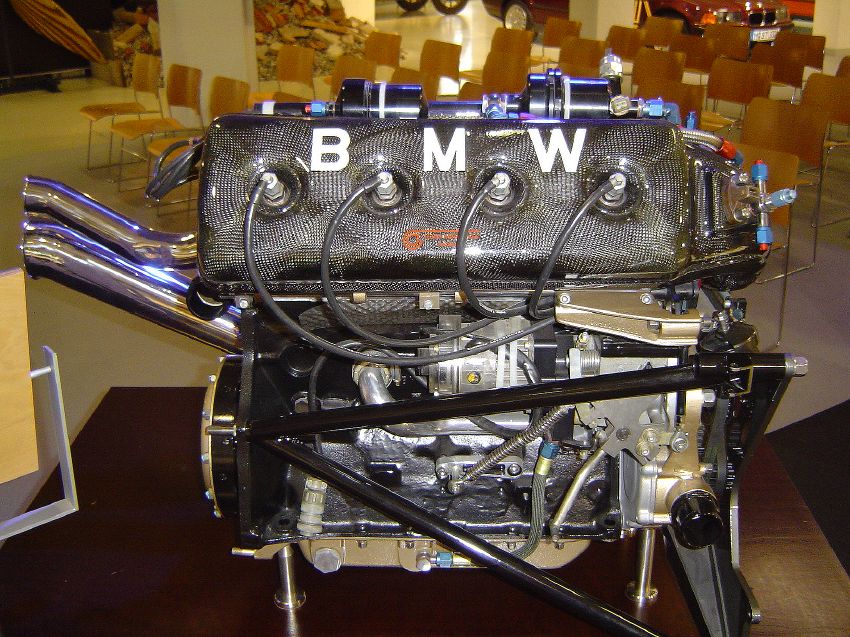 Some of you might wonder how did the engine block resist to such immense detonation inside the combustion chamber. This may not be the answer you were looking for – and most of you might not believe it – but it seems BMW was in fact using seasoned inline 4 cylinder blocks – picked up from several junkyards – for their F1 operations. The interesting part about it was that the blocks were kept out in the cold and urinated upon in order to strengthen their composition.

While some may laugh at this strange solution by the German manufacturer, the urinating process is based on nitridization (a process which introduces nitrogen into the surface of a material and is widely used in automotive, mechanical and aeronautical engineering, having the property of a case hardening treatment of predominantly steel but also for titanium, aluminium and molybdenum). Why are we talking about nitridization? Because urine seems to contain numerous waste compounds, many rich in nitrogen. We can't yet figure out how the German engineers found this particular method to strengthen the cylinder blocks – and not use a more technological measure – but it makes for some interesting stories to tell out grandsons.

But returning to the turbo era in F1, it's imperative to remind you that the International Automobile Federation (FIA) moved quickly into trying to establish some decent competition against the naturally aspirated powerplants by limiting the amount of fuel to be used by the turbo powered cars.

Needless to say, that led to immense criticism from all the teams in the series. Despite coming up with devices of computational measurement of fuel consumption levels, the teams found themselves in the situation of losing some races on the last laps – due to their cars running out of fuel. And that was not all, as the FIA continued their war against turbo engines by introducing pop-off valves. 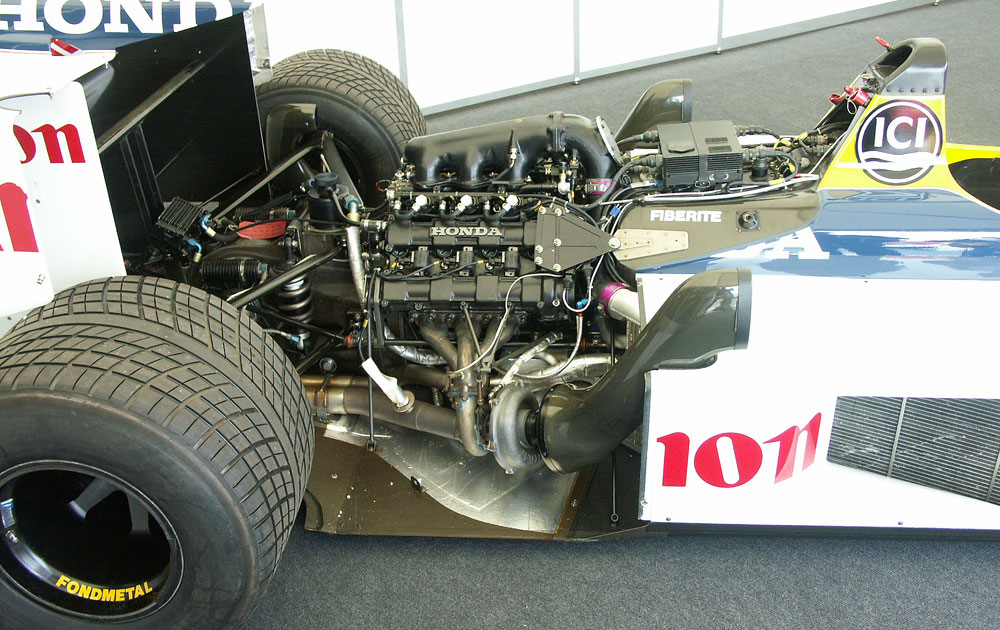 Nevertheless, all these moves were not to interfere with the turbo powered cars' capability of winning races. There was still no naturally aspirated powerplant to fight the over-600bhp producing turbos, which led several teams to switch to alternative championships for a decent shot at some wins and titles.

After years and years of trying to stop the turbocharged units from disclosing their true power, the FIA banned them for good at the end of the 1988 season. That campaign was a historical one in the series, as McLaren would use their Honda turbos and exceptional aero package to win 15 out of 16 races on schedule. The title that year was to be achieved by Ayrton Senna.

The reasons why the ruling body proceeded to such a change make a lot of sense, yet they interfere with the immense show provided by the turbo engines during the 1980. Known by many as the golden era of Formula One racing, that particular decade was full of some incredible fights on track, all triggered by the immense power provided by the turbos and the efficient aerodynamics developed by the teams in order to achieve both improved cornering speeds and easiness in overtaking.

However, as teams were starting to pour in more and more money into developing their engines – and cornering speeds were reaching some insanely high values – the FIA decided to kill them before they would develop into racer-killing machines. Oh, and one more thing: from Alboreto's win in the 1983 US GP, the turbo powered cars won each F1 race until the end of the 1988 season.