Throughout six glorious iterations, the legendary Ford Mustang pony/muscle car has grown used to facing great adversity. Especially on and around the quarter-mile dragstrip.
35 photos

That means it might even get fierce competition from peers as owners love to clash over who drives the all-time best generation. Well, the videographer behind the Jmalcom2004 account was recently on the hunt for some ‘Street Car Braggin’ Rights’ (June 18th) – an annual car event that is held at Carolina Dragway in Aiken, South Carolina. And he certainly found a suitable candidate.

That would be a cool, lime green turbocharged Ford Mustang GT of the S550 variety equipped with a bulging hood, Weld performance wheels, Hoosier tires (with cookie cutters up front and beefy units in the rear), and all the smokin’ attitude needed to show that it means quarter-mile dragstrip business.

And that is pretty obvious during the first skirmish (which kicks off at the 0:38 mark) occurring at the dragstrip proudly known as “The House of Hook.” The battle opposed the current Mustang iteration against a slightly older S-197 II fifth generation, and the latter stood no chance at all – as shown by the winning light (there were no ETs and trap speeds revealed during this event).

Next up (at the 1:08 mark) came another traditional foe, the great Dodge Charger SRT Hellcat. This crimson Mopar also meant business, but the initial skirmish was a dud on behalf of the electronic scoreboard as we think we saw the lime Mustang edging out its red opponent, but there was no official confirmation from the track aids.

Hence, they needed a rematch from the 1:51 mark, and that is also when this Ford stopped beating everyone at the track, and disaster struck. After a slower exit off the Christmas tree portion, the driver quickly lost control and veered towards the concrete barrier. But then a miracle also happened, and this Ford driver somehow expertly missed impending doom… 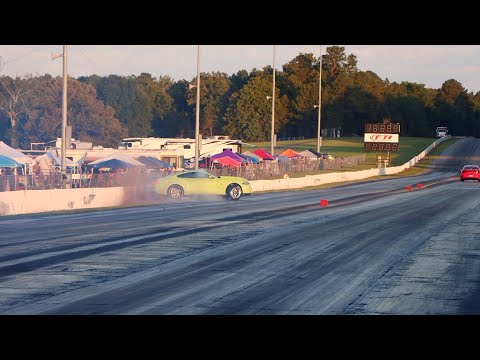