5 Nitrous Turbo Supra Eats Both ZL1 Camaro and Mustang GT for Breakfast and Dinner
Car video reviews:
Up Next

What Would Happen to Earth If Billions of Black Holes Exploded at Once?

Without being the instant hit or a legendary wonder like its predecessor, the fifth-generation Toyota Supra is diligently working up the performance ladder with what is available. From stock, that would be a maximum of almost 400 horsepower thanks to the 3.0-liter turbocharged BMW mill. But if that’s not enough, there’s always the aftermarket route.
12 photos

The greatness behind quarter-mile encounters is that owners can easily conceal their modifications under fully-stock appearances. That seems to be the case with this black Toyota Supra and its driver, who probably thought its turbo wasn’t enough... so he also went for a shot of nitrous. Unfortunately, beyond that hint, we are left without any palpable information during the latest series of drag races shown on the Jmalcom2004 account on YouTube.

On the other hand, that black Supra seemed a bit too familiar. So, we cross-referenced its license plate with a previous encounter featuring a dark Toyota, and voila: it’s the same one that was previously showcased going against the Ford Mustang GT and Chevy Camaro ZL1 on a little drag strip. The latter didn’t have any ETs or trap speeds to relate to but given the easy victories, it is easy to put two and two together and have a larger perspective.

As such, we were a bit surprised when seeing the nitrous and turbo Toyota Supra fight its way up the quarter-mile ladder at a more imposing venue. It’s the Middle Georgia Motorsports Park in Jeffersonville, Georgia and even here we had no scoreboard – the electronic aid remained mum during the recorded passes. Well, ETs and trap speeds be damned, that won’t stop anyone from having a great time. And the victor is easy to make out – just be on the lookout for the lateral green light shown next to the winning lane.

Now onto the surprise part. The GR Supra went against an S197 Ford Mustang and the battles with the crimson Blue Oval took place (from the 3:05 and 6:40 marks) both during the day and late at night. Then, in between came a second-generation Chevy Camaro for an old school vs. new age skirmish at the 3:45 mark. Yes, in the end, the Supra prevailed across the board... but the Mustang and Camaro looked so close to delivering an unexpected result. Or was it just the angle of the camera?! 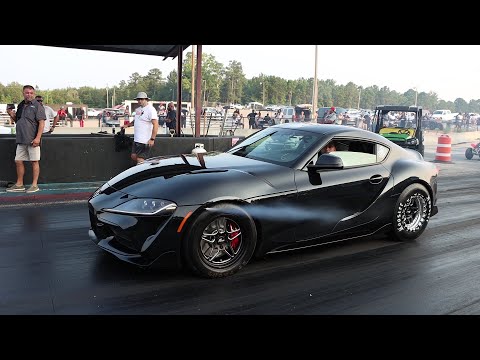