The new Toyota Supra has somehow managed to lose its appeal compared to its iconic predecessor. Some believe that it’s because of BMW, as it was co-developed alongside the latest Z4, and shares quite a few parts with it.
6 photos

However, that hasn’t stopped certain owners from tuning theirs and challenging other fast machines to straight-line battles, including the man whose name is written on the dotted line of the Japanese sports car depicted on film down below.

A 2021 model, this GR Supra is said to boast a very impressive 415 horsepower and 500 lb-ft (678 Nm) of torque at the wheels. That’s according to the owner, quoting the dyno test, yet despite rocking that much oomph, it still managed to lose against a stock BMW M4 Competition Coupe.

That’s right, you read that right, ‘stock,’ so you’re looking at the unmodified 3.0-liter twin-turbo straight six, hooked up to an eight-speed automatic transmission, and rear-wheel drive in this instance. The German premium compact sports coupe has 503 hp and 479 lb-ft (649 Nm) at the crank, available via the right pedal, rocketing it to 60 mph (97 kph) in 3.8 seconds, the official spec sheet reveals. With the optional M-tuned xDrive all-wheel drive system, it is four tenths of a second faster.

To the Supra’s defense, the owner claimed that on that particular day, “the ECU couldn’t be unlocked.” On top of that, the “outside temperature was in the negatives, and the surface was full of rocks, so we all had a hard time getting grip.” The tires weren’t apparently the best choice either, and we reckon that he could have complained about other things too, like the BMW actually being faster. Thus, we would have simply let it go and admit to losing, because no one really wants to hear all kinds of excuses, right? 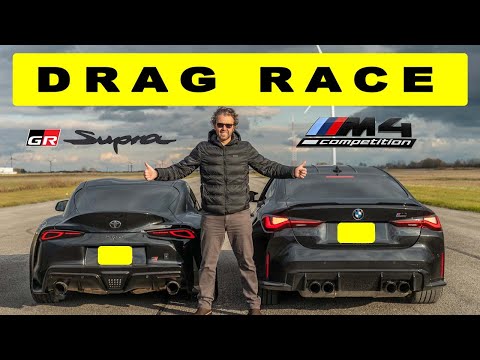