1 Volkswagen Golf GTI and Golf R Get New Accessories as Options, It's All for Show

4 750HP Volkswagen Golf R Is the Most Powerful in Its Country, Looks the Part

The Volkswagen Golf R 7.5 is not considered to be underpowered or slow, as it comes with 300 metric horsepower from the factory and can sprint from naught to 100 kph (62 mph) in 4.6 seconds. That's fast enough for most people, right? Well, not for Manhart, as they developed a kit for it a few years back. This is how one of those cars can accelerate.
7 photos

The values described are impressive. Most tuners who work on DSG cars also reflash the TCU, or transmission control unit, before letting cars like thee off into the world with such an increase in power. There is no mention of that modification here, but that does not mean it is not present on this all-wheel-drive hatchback.

As you can observe, the tuned Golf R is mighty quick from a standstill, and it will quickly reach speeds that will get you in serious trouble anywhere in the world except for a few unrestricted bits of the German Autobahn. Well, you can get in trouble there if you drive too fast, but that is a different issue.

Like many other vehicles in the compact class, the acceleration up to 124 mph (200 kph) is impressive, and things seem to slow down a bit from there. It is normal, though, as air resistance is to blame, and you need massive power to have a shot of beating it. Yes, even more than the claimed 450 horsepower, which some viewers do not feel is accurate.

If you look closely, you will notice that the first 100 kph (62 mph) is reached in the third gear, while the fifth gear is enough to break the 200 kph (124 mph) barrier. Some say that the modified Golf R should be able to crack 300 kph (186 mph) with that much power under its hood, but that does not happen, as noted in its technical specification chart. 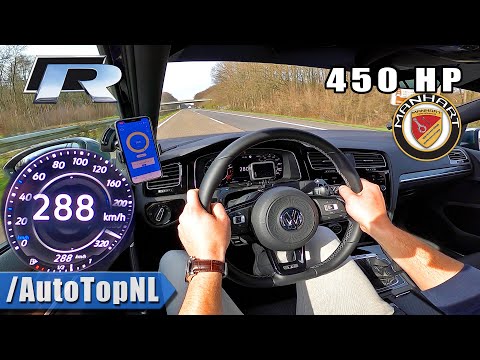