Celebrities Who Took Their Love of Porsche Full Throttle: The Collectors

While the new 992 Porsche 911 Turbo S might teach the McLaren 720S a thing or two about racing (more on this below), the previous generation of the Neunelfer certainly needs aftermarket assistance in the battle against the Woking machine. And with plenty of tuners around to help with that, we are now here to discuss an adventure of the sort.
4 photos

Having landed back in 2017 (we know, it hardly feels like the supercar has this age), the 720S has received its fair share of mods. However, this example came to the battle in factory form. Even so, while the official specs rate the maximum output at 720 PS, hence the name of the beast, real-world dyno tests have shown this is an uber-conservative estimate.

While we're talking about real-world testing, you should know both machines were placed on the scales by YouTuber BoostITFORward, who drives the Macca: his car weighed in at 3,200 lbs, albeit with the fuel level at 25 percent, while the Porscha sat some 400 lbs higher, but with a little over half a tank of fuel.

This 991.1 Porsche 911 Turbo S (by the way, here's our review of the Porscha) is a Stage IV development, with its twin-turbo 3.8-liter flat-six having been taken from 560 horsepower to around 800 ponies.

The two drivers duked it out on the street, using the good old rolling starts, so the rear-engined toy couldn't make use of its AWD asset - please don't use this as an example and head over to the track when you feel it's time for competitive hooning.

However, it seems the driver of the Porsche had to go through an entire leaded vs. unleaded fuel experience before being able to unleash the full potential of the car. And you'll see it all in the piece of footage below (you can skip to the 1:30 point of the clip).

PS:As for the 992 Turbo S - 720S battle mentioned in the intro, the second YT video below can help you with that. 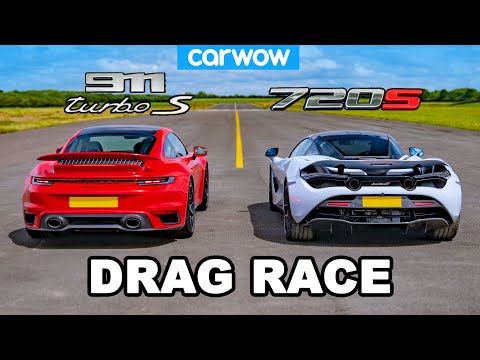