With Hollywood grinding to a halt in 2020, like many other industries, you’re probably left craving for car movie action. Crave no more.
9 photos

We’re many (too many?) months away from getting fresh car movie content – Fast 9, arguably the most anticipated production of the kind of all times, has been pushed back to April 2021 and could be delayed even further – but here’s the closest thing. A tuned Nissan GT-R R35 set itself on fire in London and the resulting video delivers on-the-edge-of-your-seat-type of entertainment akin to Vin Diesel’s onscreen stunts.

Needless to say, the car did not set itself on fire of its own accord. This happened last week, at a 100+ car meet in London, held right before the UK went into the second lockdown. A tuned Nissan GT-R stood out right from the start, with VeeDubRacing noting in the description to the video that the guy in the driver seat was “putting on a show all night, with some of the longest flames I have seen come out an exhaust.”

Indeed, as you can see for yourself in the video at the bottom of the page, the dude did really put on a show. And you probably know where this is going: all that showing off overheated the exhaust and a fire broke. With the car sitting in the middle of the street, a crowd gathered, with a handful of the bravest by-standers rushing to help out whichever way they could. Jackets were used, and water (and half a can of an energy drink) was generously thrown at the fire, but with little result, since the flames were coming from underneath the vehicle.

After a couple of very tense minutes, the true savior showed up, carrying a fire extinguisher. It wasn’t before the owner of the GT-R (presumably) ripped off the rear bumper in an attempt to get to the flames to put them out. At the end, the car had to be pushed away by the same dudes who helped out, while another guy carried whatever was left of it behind.

“I have no idea on the full extent of the damage, but I can't imaging the bill is going to be cheap,” the description of the video continues.

While we can’t but speculate on that, there are two major takeaways from this video: number one, revving your engine non-stop is not wise and number two, how amazing is the car community? Not a single one of the people gathered there laughed or cracked jokes until the danger had passed, and then too, it was more of a relief laugh than a “this is what you get for wanting to show off” LOL. 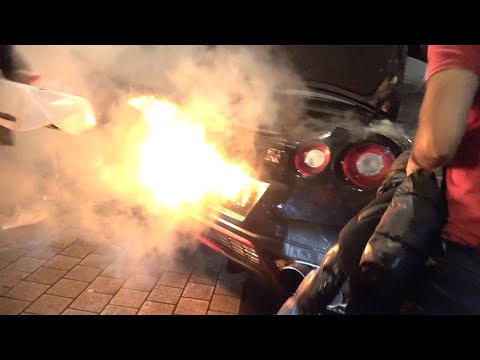