2022 Hot Wheels Legends Tour Is in Full Swing, Big Winner Yet to Be Chosen

Sam CarLegion previously treated us to car-versus-car drag races. On this occasion, he added a third contender to the mix to stir things up a bit.
13 photos

Representing front-wheel drive, the white-painted Accord in this video is rocking a stage three tune that brings wheel horsepower to roughly 300. Wheel torque isn’t shabby either, with the owner quoting 360 pound-feet (488 Nm) or thereabouts. Closely related to the 2.0-liter turbo in the Civic Type R, the four-cylinder lump in the Accord normally cranks out 252 horsepower and 273 pound-feet (370 Nm) from 1,500 to 4,000 rpm.

Spruced up with smoked taillights, black-out badges, window tint, snazzy wheels, and more serious rubber, the Honda should be properly impressive in this particular specification. However, the red-painted Acura TLX Type S may pose a problem. Originally rated 335 horsepower and 354 pound-feet (480 Nm) between 1,400 and 5,000 revolutions per minute, the single-turbo V6 in this car produces a bit more than advertised. Why? Due to “a full straight-piped exhaust with a cat-less downpipe” according to the owner.

The premium-oriented sedan employs a 10-speed automatic like the Honda, but as opposed to the Honda, the Acura further boasts all-wheel drive. Given these differences, it shouldn’t come as a surprise that curb weight favors the Accord at 3,380 lbs (1,533 kgs) versus 4,221 lbs (1,915 kgs) for the TLX.

As for the final entry, the soon-to-be-discontinued Kia Stinger is much obliged to duke it out with the Japanese sedans. The GT appears to be 100 percent stock, which means that we’re dealing with a 3.3-liter V6 that belts out 365 horsepower and 376 pound-feet (510 Nm) thanks to twin turbos.

All-wheel drive just like the TLX, the white-painted Stinger uses an 8-speed automatic and tips the scales at 4,023 lbs (1,825 kgs). From a dig, the Acura launches better than the other two cars, yet loses steam against the Stinger by the quarter-mile finish line. The other races are all rolls, and – spoiler alert - the South Korean liftback loses only once due to the driver’s late reaction. That said, care to guess which of these cars always finishes last? 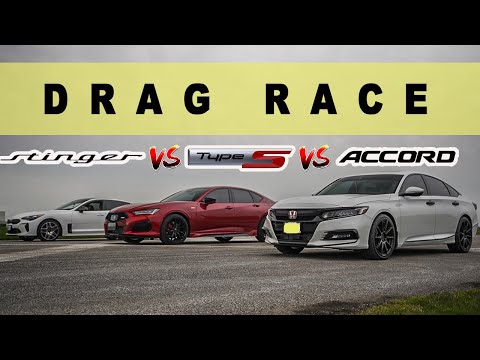