5 Modern Ford Escort RS Cosworth Is What the Focus RS Should Be
Car video reviews:
Coverstory

Tuned Ford Focus RS Tries to Hit Its Top Speed on the Highway, Doesn't Have Room

A few years ago, when Ford introduced the third generation of the Focus RS, nobody knew it would be the last of its kind. At the time, the Focus RS followed the footsteps of its second-generation brother, which had an inline-five-cylinder motor that pumped out 305 metric horsepower (300 horsepower). The Mk3 model came with a four-cylinder motor that was shared with the Mustang.
6 photos

Ford only offered the Mk3 Focus RS with a six-speed manual transmission, but the last hoorah in this lineup came with all-wheel drive and a smart rear axle. We wrote a separate article on how that works. Its four-cylinder motor provided 350 metric horsepower (345 horsepower) and 441 Nm (325 lb-ft) of torque.

Having the German Autobahn at your service may “help” someone gets used to all that power, which will motivate owners with enough money left in their bank accounts to go for even more horsepower. The vehicle seen in the video below was modified by the specialists at RH Renntechnik, as well as people from XBM Tuning.

With the work completed as the owner requested, the result is 440 metric horsepower (433 horsepower) with 500 Nm (368 lb-ft) of torque. That is a respectable bump from the 350 that came with the stock motor, while peak torque increased by 59 Nm (43 lb-ft). As you can observe, the Mk3 Focus RS can use the extra power it has to drive past its old top speed.

If the driver has enough space in front, a tuned Focus RS can reach 284 kph (176 mph) in relative silence. At this kind of velocity, the level of noise that you can hear in the video is more than reasonable for a hot hatch made by a mass-market manufacturer.

Now, you might say that there is a bit of speedo error here, and there is, but that is why the GPS is on-duty, and it shows the Focus RS topping out at 274 kph (170 mph) just before the driver has to slow down because of a vehicle that is in the passing lane and blocks the way. 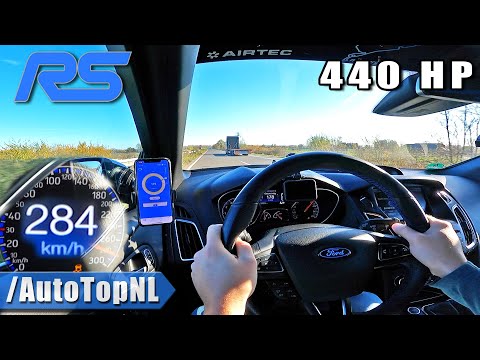