We’re well aware that there are many ‘Lil’ rappers out there, and in this instance, we’re talking about Lil Uzi Vert. The Dodge Durango SRT Hellcat pictured below is one of his toys, and it sports a few mods that aren’t that bad at all.
6 photos

As a matter of fact, the whole project is quite eye-catching, and deserves the Widebody suffix, with fender flares, linked together by fatter side skirts, decorating the profile. It has a bigger chin spoiler, tweaked rear skirt, and privacy windows too, and rides on new wheels.

Made by Forgiato, which is the company that shared these pictures online, the black multi-spoke alloys are bedecked by their custom center caps. They are hugged by a pair of slim tires, and they spin around the red brake calipers, which provide some minimal contrast to the gray body of the super SUV, and black add-ons mentioned above, which bear the signature of West Coast Customs. As for the bodykit, it was made by Waido in the Czech Republic.

The front fenders are still decorated by the Hellcat emblem, and since they haven’t released any pictures of the interior at the time of writing, we are going to assume that they haven’t tuned it. The same goes for the powertrain too, yet that’s alright, as you are looking at one of the fastest SUVs out there without anyone messing around with the internals.

Capable of giving previous generation supercars a headache in a straight-line sprint, the Dodge Durango SRT Hellcat uses the famous supercharged 6.2-liter V8. The HEMI engine develops a neck-snapping 710 horsepower and 645 pound-feet (875 Nm) of torque, which enables a 0 to 60 mph (0-97 kph) sprint in just 3.5 seconds. The vehicle will run out of breath at 180 mph (290 kph), and on a good day, it can deal with the quarter mile in just 11.5 seconds. 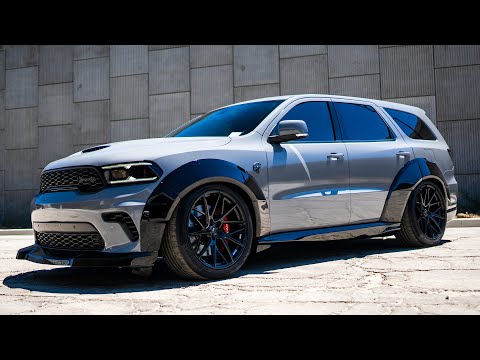 Editor's note: Edit: H/T to Waido for reaching out to us, confirming that the body kit was made by them in the Czech Republic.