Mihnea Radu
You're about to watch a unique race. Tuning a base turbo model with a turbocharged engine until it glows hot is a European thing. But this Canadian shootout puts a Civic Type R against the 1.5-liter vanilla sedan, and the results will surprise you.
5 photos

Europeans have their hatchbacks, but they don't seem to love the Civic that much, so there's no VTEC tuning going on. And until this generation (the outgoing one), you couldn't get an engine that's worth tuning. The 1.5-liter VTEC Turbo is a good engine, but we really didn't expect it to perform so well.

In stock form, it's no different from every other 180-horsepower small turbo from Hyundai, Kia, or Ford. But the car in this race has been modified to produce about 260 horsepower and 240 lb-ft (325 Nm) of torque. Even so, there's no way that it wins anything here.

We've all seen cars that become slower when they're tuned. But the owner thinks he's got something good going on. Also, his economy car has been modified with over-the-counter parts. It appears to have coilovers, extra skirts, a diffuser, new exhaust, extra trim, and custom taillights. And those don't look like the crappy tires most Civics are sold with. We'll also award points for the Batman logos on the wheels.

But its first rival is the real deal, a Civic Type R hot hatch. Under the hood is a 2.0-liter rather than a 1.5L, and it produces 306 horsepower. It's got a manual versus the CVT, but things don't go as we expect them to.

During the first and second races, the base Civic loses the start but pulls ahead after, like a car that's got more horsepower. With the Type R out of the way, the plucky Honda takes on the Hyundai Veloster N. This is also tuned because the 2.0-liter turbo is said to make 295 horsepower.

And you might want to watch the last races in the video too. After multiple rounds, the CVT was apparently heating up, making the car slower. That's not a common problem in the drag scene. 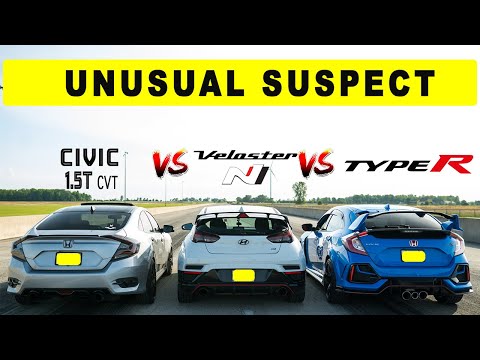