4 Tesla Model S Plaid Races Dodge Demon, All Hell Could Break Loose After This One

The eternal struggle between American sports or muscle cars and various imports is being fully exemplified with the latest feature from the good folks over at the Drag Racing and Car Stuff channel on YouTube. And there’s also some tuning mixed in for good measure.
19 photos

You could easily conclude this thing briefly holds everything that makes drag racing so varied and great. Old school muscle, and a sports car that’s still young at (mechanical) heart via the diligent care of its owner and the aftermarket outlet that modified it. A potentially contemporary Japanese import adversary for the latter. As well as a modern knight. Complete with quattro all-wheel drive and its modifications.

So, it’s anyone’s guess what could go down for the trio of battles prepared by D.R.A.C.S. during their latest video (embedded below, as always). After all, there isn’t that much background information shared with the viewers, save for the details concerning the social media channel of the C5 owner and the name of the company that performed the (unidentified) modifications on the supercharged ‘Vette.

One thing we do know for sure is that we are dealing with stick shift Chevy material here, so that sets up the right perspective for this Z06 Corvette. Its first battle comes from the 0:30 mark against a decidedly vintage Camaro, but the older Chevrolet has no chance, even with the ‘Vette’s late start. So, the case is closed with an 11.37s vs. 12.53s result.

Next up, from the 1:05 mark comes a black Acura Integra Type R, and the rare Japanese samurai almost delivers the surprise against the massaged Corvette. Still, the stick shift Chevy gets the win after a very close 11.2s to 11.24s encounter. Last, but certainly not least, comes the modern foe as a tuned (again, no info on the mods is given) Audi RS 7 Sportback from 1:38.

Although it’s clear the C5 driver knows well it will take everything to secure the win and significantly ups the game to get down into ten-second territory, it’s ultimately not enough. So, the quattro wonder shows the importance of traction with a 10.8s victory against the Z06’s 10.98s run and higher trap speed (132 mph/212 kph to 129 mph/208 kph). 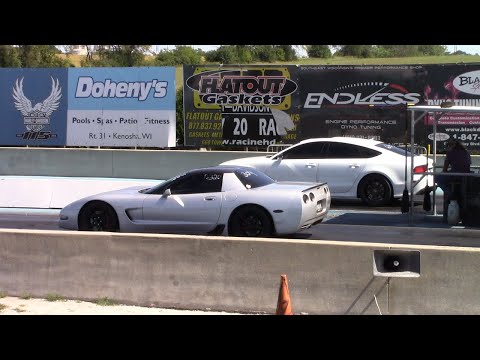