1 BMW M3 Guns for the CSL Suffix, Gets Christened the MH3 GTR Instead

3 Ford Mustang GT and BMW M3 Engage in Quarter-Mile Battle, Doesn't Go Well for One of Them

Tuned BMW M3's Got a Mouth So Big That It Trash Talks Supercars, But Can It Walk the Walk?

Here’s something that we don’t get to see every day: a sports sedan putting its money where its mouth is against full-blown supercars.
8 photos

The model in question is the previous generation BMW M3, only it’s not your run-of-the-mill premium compact sports vehicle, but one that has been tuned to the teeth.

Displaying the name of its maker on the sides, in the form of decals, this M3 has in the region of 740 horsepower available via the fun pedal. We don’t know if those are metric or brake, as the video uploader hasn’t said anything else about it, other than the fact that it has been modified by Mosselman Turbo System. Thus, in theory, it does have what it takes in order to show blue-blooded exotics how it’s done.

As a result, it took on quite a few of them at the SCC500 Rolling50-1000 event in Germany, presumably earlier this year, with the video embedded at the bottom of the page being uploaded two days ago. Among the vehicles that it challenged to a straight-line duel were a Ferrari SF90, a Lamborghini Huracan, a Porsche 911 from the 992 generation that appeared to be in the hot Turbo S configuration, and even a mighty Lamborghini Aventador, presumably the LP750-4.

Towards the end of the footage, which is almost five and a half minutes long, you can see it engage in two more battles, against an Audi, and another Bimmer, confident that it can cross the finish line first. So, did it? Maybe, maybe not, though one thing is certain, this is one fast M3 that can truly mix it with supercars. You may want to take a short break to watch the video that follows, as it is well worth it, and perhaps place a little bet too before every race. 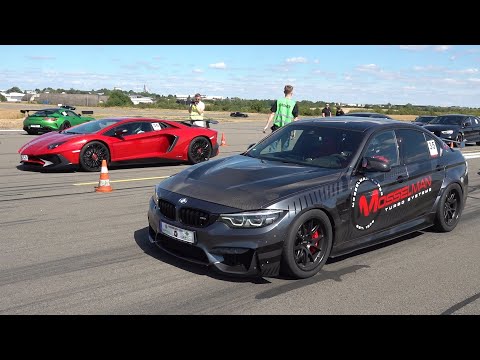