1 Tuned Audi RS 7 Looks Rather Tamed; Come On, Mansory, You Can Do Better!

Tuned Audi S7 Confident It Can Kick American Muscle Car Butt, Will Anyone Stop It?

Cristian Gnaticov
Born with a silver spoon in its mouth, the Audi S7 likes to get down and dirty every now and then, and mingle with more affordable models.
10 photos

It is even more daring with extra oomph squeezed out of its engine, like this first-gen example, filmed at the Kil-Kare Raceway in Ohio last Thursday, which was eager to prove its worth against different American muscle cars, and not only.

Visually, it looks like a well-taken-care-of executive model, with a black paint applied to its exterior, some chrome accents, and what seem to be OEM wheels. However, it actually hides a secret under the hood, as this 2013 Audi S7 has received a pair of turbos normally reserved for the more menacing RS 7.

Considering that it goes like a bat out of hell for what is still a rather old car, which isn’t that powerful compared to today’s offerings, it is likely that it has other tricks up its sleeve. Unfortunately, we don’t know how much power it has on tap, but when it left the factory floor, almost ten years ago, its bi-turbo 4.0-liter V8 mill had 414 hp (420 ps / 309 kW) and 406 lb-ft (550 Nm) of torque bouncing off the walls.

The thrust was directed to the quattro all-wheel drive system through a seven-speed S-tronic gearbox, and in this configuration, the car needed 4.7 seconds to sprint from rest to 62 mph (0-100 kph). However some have reported that it is quicker than that in the real world, with MotorTrend claiming that the 60 mph (97 kph) mark was hit in just under 4.0 seconds.

So, with that much oomph available via the right pedal, aided by the bigger turbos and other work, can this Audi S7 rule the drag strip? Only one way to find out. 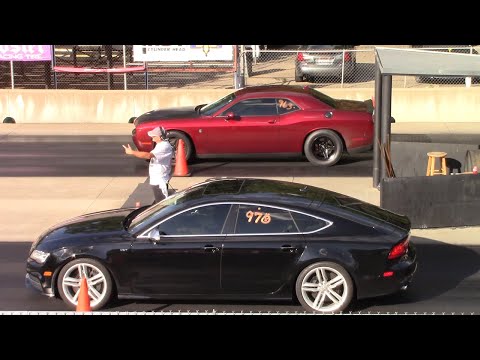