Aurel Niculescu
When Hennessey released the updated 2021 Venom 775 upgrade pack for the latest and (arguably) greatest Ford F-150, its target was adamantly clear. With all the off-road goodies in place, no Ram TRX felt safe anymore.
26 photos

But, as it turns out, that’s not all it can do. Usually, the newly unleased supercharged Hennessey Venom 775 Ford F-150 was developed as a weapon of dune-bashing and rock crawling mass destruction. Logically, since it’s designed to go head-to-head with the mighty factory-spec Ram 1500 TRX.

As such, it not only has another 375 horsepower on top of the 5.0-liter Coyote V8’s factory 400 hp. But it also comes with elevated off-road performance thanks to “integrated front and rear Venom bumpers, a front LED bar, a 6-inch lift, and 20-inch Hennessey 10-spoke wheels wrapped in 35-inch off-road tires.”

Well, according to Hennessey, that’s just one way to look at the new Venom 775. The other would be to go for the upgrade package and the Sport Kit (lowered, stiffer suspension, street wheels, and tires). Mixed and matched on a Regular Cab F-150 on this particular occasion, the Hennesey folk reckoned it becomes a super truck that might keep up with the Blue Oval’s flagship Mustang, the Shelby GT500.

To prove their theory, the Pennzoil Proving Ground proved the perfect location for a quick comparison. And what better way to see if they could keep up than to stage a traditional drag race? Or two, for that matter, just to make sure – and probably because it’s way too much supercharged fun to have just one go at it.

Well, prepare to be surprised because the Venom 775 F-150 clearly wins the first race. Of course, having an all-wheel-drive system at its disposal on an un-prepped surface is usually enough to decide who launches better. But, as it turned out, even at high speed, the truck almost kept its entire lead. So, the second race even gives the GT500 a small lead, but the “freight train” pickup truck ultimately proves unstoppable. 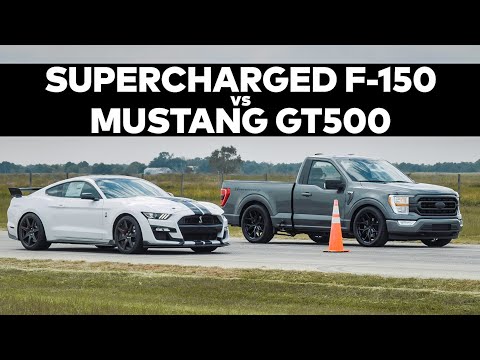