Tuned 2018 Shelby Mustang GT350 Is on Its Third Engine, Looking for a New Home

Dragos Chitulescu
Ask any real automotive enthusiast and they'll tell you that nobody likes a garage queen, especially if it happens to be a car specifically built for people looking to go fast around a race track. So I felt quite relieved that this 2018 Shelby Mustang GT350 has been driven hard during its lifetime. Some would say a bit too hard.
24 photos

Pushing your car to its limits is bound to take a toll in time, and if you've ever been involved in any form of motorsports, you will know that engine failures happen all the time. And this Shelby GT350 is already on its third engine, which might be shocking for some people, considering this is a three-year-old vehicle. It left the factory in Flat Rock and arrived at the dealership with a window price of $62,135.

It didn't come with a long list of optional equipment, as it only featured a Ruby Red paint job, an electronics package, and a painted black roof. But the owner wanted to go even further and make this car even more track-focused than it already was. So a long list of upgrades was up next. You'll see this car going up to 150 mph (241 kph) quite frequently on the track, so a Watson Racing heavy-duty, four-point roll bar is a good feature to have.

The driver sits in a Cobra Nogaro sport seat, secured in place via a Schroth 6-point harness. As soon as you open the door and see the cabin, you begin to understand that the previous owner was dead serious about extracting everything he could out of this GT350 out on the track. Even though you might dislike the fact that there's no air conditioning anymore, at least the car is said to be about 350 lbs (158 kg) lighter than it originally was.

Remember, the Shelby GT350 is already more track-focused than the GT500, and it was benchmarked against cars like the Chevrolet Corvette C7, the Porsche 911s, and the BMW M4. But in its current form, it's bound to give its rivals one hell of a ride. At first, you will notice the rather huge APR GT-250 Carbon Fiber Rear Wing, but you might also see the Forgeline competition wheels and the upgraded brake package.

The V8 has been made to growl at an even more impressive level than it used to, but seeing that this car is not street legal, it should be safe to take in all that noise without experiencing severe headaches. This vehicle has also been dyno-tuned and should be capable of 520 wheel horsepower, which means some Ferraris may no longer be out of reach, at least in certain circumstances.

This new engine is what you would get in a GT350R, the kind of Mustang that could even keep up with a Porsche GT3, and with all the documentation provided by the seller, everything seems less sketchy than you would tend to think. The auction still has five more days to go, and right now, the highest bid stands at $50,000. That may not sound like much, but remember that this is a track-only vehicle, so you might want to go shopping for a Ford truck to tow this thing too. 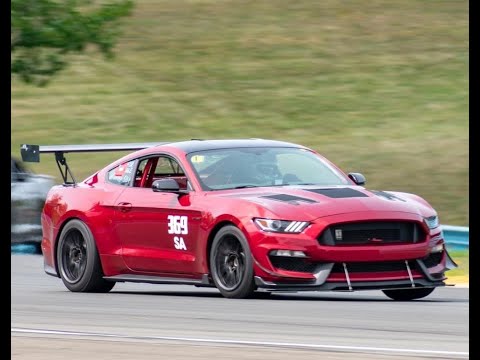