4 This Is the New Batmobile!

Ionut Ungureanu
Like in every edition since the first one in 1999, out-of-this world beasts will once again take part of the 2014 Gumball 3000 rally. Although last year they’ve experienced some problems with their 2.5 tons (5,000 lbs) custom built Batmobile Tumbler, Team Galag decided they return with a revised look for what is probably this year’s most expected auto event.
1 photo
Among just about every Ferrari, Bugatti and Lamborghini built over the past 30 years, exclusivist crazy cars will also be part of this year’s Gumball 3000. Team Galag will be racing the Batmobile once more, only this time it’s allegedly an updated appearance of the monster car.

Shmee 150, one of the car enthusiasts that will be broadcasting the entire rally, has just posted a 3 minutes clip on his Youtube Channel with the 400 bhp wider than a truck Batmobile Tumbler from the Dark Knight movies. And we have to admit, this six-wheeled beast grawls like no other.

It’s true that it weights almost the double of an dry McLaren P1, but who cares, right? Just think this superhero car is powered by a V8 6.2-litter engine that is coupled with a Cherry Bomb custom exhaust. I mean you think there’s going to be at least one person not to notice it? Just listen to it!

In case you’re wondering, we’ll remind you a couple of the original technical specifications of the Batmobile: 15 feet (4.57 m) length, 9 feet 4 inches (2.84 m) width and super swampers tires standing 44 inches tall. And just to make this car even more special, it is actually able to rise up on its front suspension while the rear wheels stay planted on the ground creating an effect like a giant spider. 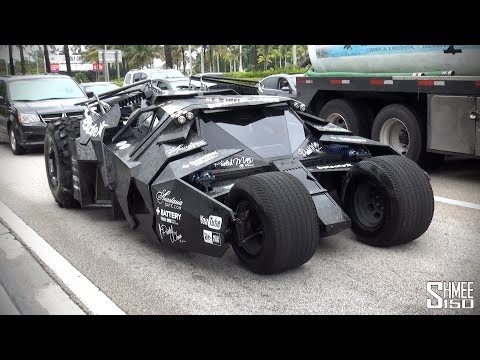