Ionut Ungureanu
You don’t need to save up an entire year for the perfect two-week journey to Asia to find out about the Tuk-Tuk, a motorized three-wheeler mostly used for urban transport. They’re so popular it almost feels like a cultural thing, so it’s no wonder there’s one driver who does extreme stunts with it.
1 photo
Even though these tiny motorized rickshaws may seem rather peculiar, they have been around for many years. After WW2, aircraft designer and inventor of Vespa Enrico Piaggio came up with the idea to create a light commercial vehicle to power Italy’s post-war economic reconstruction. In Southeast Asia, it all started from the knockdown production of the Daihatsu Midget, which was introduced in 1957.

To put things into perspective, it’s Japan which exported three-wheelers to Thailand since 1934. The point is they have been around for a long while, something that explains their traditional grounds.

Getting back to the Indian daredevil, it’s worth mentioning that Jagathish M, the hero of this story, spends his days as a tuk-tuk driver in Chennai, Tamil Nadu, India, getting his customers safely to their destination as a responsible employee. It’s only at night that he puts on the crazy jacket and starts practicing extreme stunts.

His specialty: side-wheel driving. Even so, getting in the record books wasn’t as easy as one may think, considering he had to remain on just two wheels for the entire attempt and travel a minimum of one kilometer. That he did, with no problems. In fact, he more than doubled the distance to a total of 2.2 km (1.4 m). To pull that off, he had to get his rickshaw moving at a speed of 80 km/h before he skillfully used the steering handles to transfer the vehicle from three to two wheels.

His record is part of next year's Guinness World Records Edition, but there’s a video below you can watch to see how it all went down. 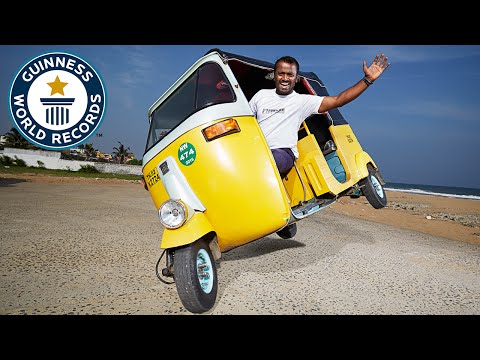