Home > News > Auto Motorsport
Dragos Chitulescu
There are several things you can do to make your car faster. Upgrading the engine is just one of them, but that's not necessarily the most affordable option. Think of it like this: if you've got no cash to spare, putting your car on a diet is the best thing you could do. Just get rid of all the dead-weight, and you'll get better results at the track.
14 photos

Of course, the smartest way to go about the whole thing is to pick the right car from the beginning. You don't need 1,000 horsepower if you find something that weighs less than 3,000 lbs (1,360 kg). If you are going to get something that's over 4,500 lbs (2,041 kg), then you're making things harder on yourself.

And today's drag race is a good example of that. We're looking at a battle between two lightweight European sports cars and a huge pickup truck. And we do mean huge, as the Ram 1500 TRX weighs over 6,000 lbs (2,721 kg). Mat Watson from carwow uploaded a video today where they raced the American off-road beast against two lighter, less-powered sports cars on their track in the UK.

Granted, we aren't talking about an ordinary TRX here, as this is the Mammoth 1000 built by Hennessey Performance. So at least there's some serious grunt fighting against all that weight. We are talking about over 1,000 horsepower and almost 1,000 lb-ft (1,355 Nm) of torque here, and that's not to be taken lightly.

Comparing it to the Audi TTS and the Porsche 718 Cayman, that's more power and torque than both of them put together. But this statement also applies to the weight and the price of the pickup truck.

The Porsche is the only RWD car here, and it's also the lightest one. That may provide an advantage during the roll race. Both the TTS and the Cayman use 7-speed dual-clutch automatic gearboxes, as opposed to the 8-speed automatic on the TRX.

All three cars are neck-and-neck as they engage in the first run of the day, but the Audi starts pulling ahead. But it's the Mammoth 1000 that wins this first leg, albeit by just a few inches. On the second run, the roles are reversed, and the pickup comes in second place.

The last standing quarter-mile (402 meters) run is the one that determines the winner of this part of the challenge. This might come as a surprise to some of you, but the Mammoth 1000 once again rises to the occasion and crosses the line in 12.6 seconds.

Meanwhile, its two European opponents are just 0.1 seconds behind. But things are about to change for the next step of the challenge. With the AWD advantage out of the way, weight is going to play an important role in the roll race.

The Cayman scores its first victory of the day as it crosses the half-mile (804 meters) finish line ahead of its Audi cousin. But the roles are once again reversed for the second run, as the TTS asserts dominance over its rivals. Now, we aren't going to tell you how the brake test went, but you might be shocked to see the difference between genuine sports cars and the beefed-up pickup truck. 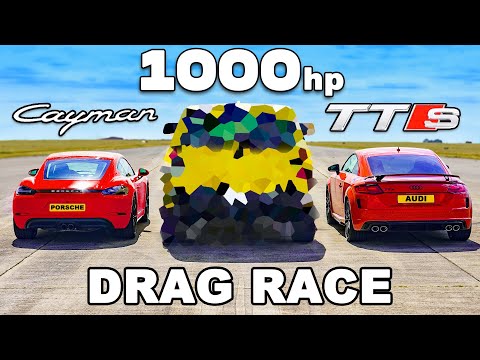