3 2021 Ford Broncos Are Popping All Around, Including Next to Gen 1 and Wrangler

4 TFL's Undisputed Off-Road SUV vs. Truck Battle Gets Kind of Settled in Moab

Matthias Maurer Is Gearing up for the Cosmic Kiss Launch, With a Special Mission Video

TRX, Bronco, Can-Am Maverick Go for Mountain-Pass Off-Roading Because They Can

No need to beat around the bush on this one, because it’s another of TFL’s well-known clementine vs. orange vs. grapefruit comparison, to keep the proportions. They love them, and so do we.
41 photos

Especially when a hulking Ram TRX, a flagship Bronco, and a tough SSV are involved. We have seen many apples versus oranges comparisons over the years, but it’s true these never get old because there’s always a surprise waiting to catch you unprepared.

Besides, when it comes to the good folks over at The Fast Lane, one can always bet on the unexpected. And, at least as far as this feature is concerned, they seriously upped the ante in terms of visual prowess as well. Don’t expect a work of art, but it seems that everything around them “conspired” to get some of their greatest beauty shots to date.

So, they have a cool side-by-side, a Can-Am Maverick with a very long name. We didn’t remember it all, but we really don’t have to, either. It’s enough to know that it’s the company’s toughest and most capable yet. And it’s 195-horsepower of fun, of course!

Moving on from smallest to largest comes the Cyber Orange 2021 Ford Bronco First Edition. It’s a great example of what a Sasquatch can achieve from the factory, complete with twin-turbo power that doesn’t suffer from height dizziness.

And last, but certainly not least, they have a crimson 2021 Ram 1500 TRX, the biggest and most powerful vehicle of this particular trio. Sure, all those 702 ponies might not get put to significant use on a rather narrow trail, but that doesn’t mean it wasn’t supposed to tag along. After all, they needed it for towing the Can-Am home...

Anyway, the TFLoffroad guys went off-roading somewhere special. And the setting is both serene and inviting to a lot of trailing fun. The goal was both easy to explain and utterly ambitious at the same time: conquer the legendary Argentine Pass, up 13,207 ft. (4,025 meters) into the Rocky Mountains, in Colorado.

So, even if you don’t like any of the three vehicles, the blissful meeting between snow and the final remnant of autumn is way too gorgeous to decline... Besides, the rock crawling was also just as cool! 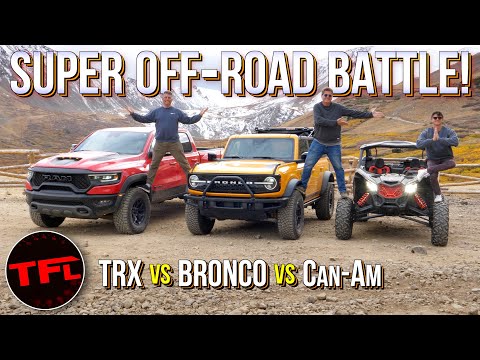