Vlad Mitrache
We know the specific architecture of electric vehicles enable them to make better use of the limited space available inside the body of a car, but people usually refer to its wheelbase and the interior room for passengers when talking about it.
9 photos

That can make banana boxes feel a little left out, so Bjørn Nyland decided to show them a bit of attention and use them to test the trunk capacity of five of the most popular EVs on the roads right now. They had a BMW i3, a Hyundai Ioniq, another South Korean in the Kia Soul EV, a first-gen Nissan LEAF, and the Tesla Model X in two seating configurations.

These vehicles have very few things in common apart from the fact they all use battery-powered electric drivetrains. The BMW is a small city car, the Nissan is a compact-sized (by European standards) hatchback), the Hyundai is a liftback sedan, the Kia is a mix between an MPV and an SUV while the Tesla Model X is a larger version of the same breed (though officially it's an SUV).

It's common knowledge that car manufacturers use parallelepipedic shapes with a one-liter volume to measure the trunk capacity of a new car, so this banana box test isn't as ridiculous as it may seem. It's similar in principle, but uses a much larger object for benchmarking, which is closer to what would happen in a real-world situation.

The banana box is roughly the size of a small suitcase - the kind you would grab as a carry-on on a plane. You would probably never have to take more than two or three of them in the car, but it's still more relevant than a few hundred cubes with a ten-centimeter-long side.

So, curious about the results? Predictably, the BMW i3 did the worst, but it could still fit four boxes in its trunk, which isn't bad. Second-to-last was the Nissan LEAF with five boxes, but the result could have been better if it weren't for the weird shape of its trunk. Next up was a tie between the Kia Soul and the Hyundai Ioniq with six each. The runaway winner was the Tesla Model X with eleven in total (one in the frunk and ten in the trunk).

For the part two of the test, the guys tried the same thing but with the second row of seats down. The BMW still came last with 14, followed by the Hyundai Ioniq with 16. The taller shape of the Nissan LEAF allowed it to skip one place ahead with 18 boxes, but it still had three fewer than the Soul EV. Again, the Tesla won by a hefty margin fitting 28 in total.

Just for the sake of it (and to give a perspective on the Model X's achievement), they also brought a Nissan e-NV200 electric commercial van. It appears they had to eat a few more bananas because they ran out of boxes before they could fill the entire van. However, with 37 of them in place, they estimated the total capacity at around 48 to 50. That's less than double what the Model X could carry. 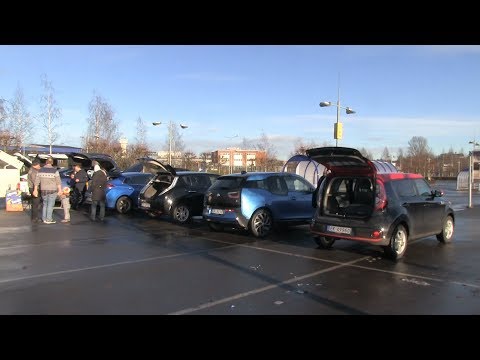