Trump Force One Lands in New York for the First Time 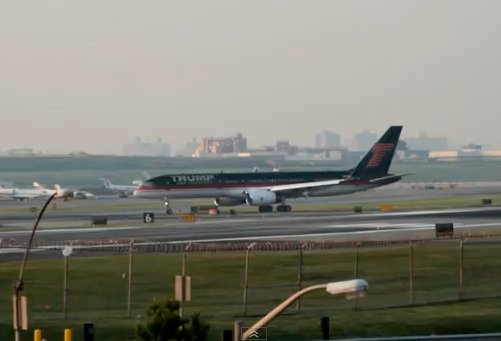 If you haven’t heard of the name Donald Trump, you’re either a hermit priest or you haven’t left your cave for some 40 years. The New York real estate mogul is a man who needs to travel fast (not between his hairstylist and filming for The Apprentice as you might have thought), to make sure his $2.7 billion wealth (according to Forbes) gets even bigger.

So a few months back, Trump purchased Boeing 757 for personal use form Microsoft co-founder Paul Allen, which he had restyled to his own taste at a facility in Georgia.

With the refurbishment having just been completed, the $100 million private jet was recently caught on 'tape' landing at the New York’s LaGuardia Airport for the first time. The aircraft seats 43, and comes with private bedroom with a huge, flat-screen TV, a work desk, and a console that triggers the electric shades to the room's oval windows.

According to NYPost, the bedroom has two closets, one for Trump and one for his wife, Melania. A private bathroom with a circular shower and plenty of gold detailing on the sink and faucets are also featured. The main cabin area features several rows of plush, wide seats and cushy, cream-colored couches that surround boardroom tables or face flat-screen TVs.

Moreover, the high ceilings are covered in suede, while refinished wood paneling runs along the sides of the plane and gold-leaf detailing makes the seat-belt buckles gleam.

The jet’s arrival comes one day after Trump told local Fox’s Good Day New York he might still run for President as an Independent candidate if the Republicans fail to produce a strong candidate.