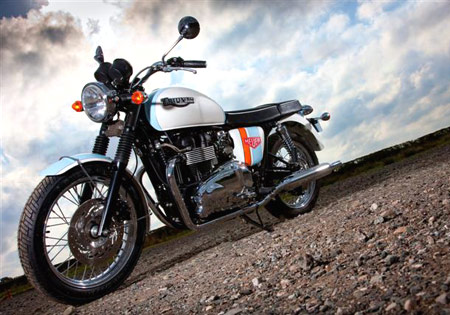 In fact, the late actor Steve McQueen was famously linked to both brands. McQueen owned several triumph motorcycles and in movies such as The Great Escape (1963). For 2010, the Triumph clothing range includes a jacket and t-shirt reminiscent of when McQueen raced a Triumph in the International Six Days Trials in Germany. 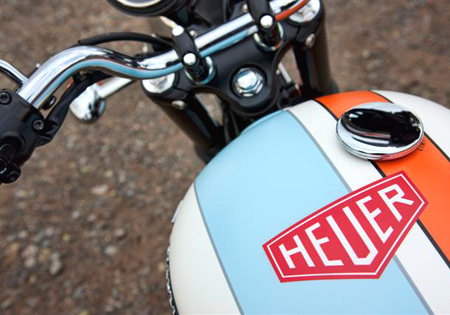 The TAG Heuer Bonneville features a blue and orange paint scheme that was inspired by the Porsche sports car driven by Steve McQueen’s character in the movie Le Mans (1971). McQueen wore TAG Heuer’s Monaco watch in the movie, and TAG Heuer is celebrating the 40th Anniversary of the watch.

The special Triumph Bonneville can be seen at various watch shows and TAG Heuer retailers throughout Europe.

“We are delighted to play our part in this exciting project. The Triumph Bonneville and TAG Heuer Monaco are both timeless masterpieces, celebrating their respective 50th and 40th anniversaries this year,” said Neil Morley, Triumph’s Head of Brand Communications. “We also both have a natural connection with Steve McQueen, who famously wore a Monaco watch in the film Le Mans and was renowned for his love of our bikes, making this a very natural collaboration.”