1 NASA Is Looking for the Next-Gen Lunar Vehicle, Won't Be Your Grandpa's Moon Buggy

5 Artemis SLS Rocket “On the Path to the Pad” As Flight Software Meets Computer
Car video reviews:
Up Next

In a few years’ time, humanity will return to the Moon. This time, we’re not going there just to visit and perform the occasional experiments, but we’re going there to stay, and build a life. That means the Moon will forever be transformed in the mid-term future, as we keep exploring and making it into a home away from home.

Trident Is the Mother of All Off-World Drills, Made to Dig Deep Into the Moon

It’s the Artemis program that will put human boots back on the Moon, and for most people that means the Space Launch System rocket and the Orion capsule that will transport astronauts there. But Artemis is an extremely complex program, and the number of technologies being developed to support it is simply staggering.

As of this week, we’ll start our journey through the long list of less visible, but equally as important pieces of hardware meant for the Moon, and we’ll do so with something called Trident.

But first, some history. Back in the days of the Apollo program, despite the 11th mission being the most high-profile one (it was, after all, the first to reach the satellite and set down), it was probably Apollo 15 that was the most important. That’s when NASA deployed on the surface of the Moon and used the Lunar Roving Vehicle, but also something called ALSD.

ALSD stands for Apollo Lunar Surface Drill, and it was a battery-powered rotary percussive tool used to hammer its way past the surface at a speed of 280 rotations and 2,270 blows per minute. The thing was so powerful it could drill into basalt, although it didn’t have to and had to settle for the lunar regolith. It was used by Apollo 16 and 17 astronauts as well.

The Artemis missions will have a similar tool as well. It’s called Trident, and it is being designed by Honeybee Robotics, one of NASA’s old-time partners in this field.

Trident, despite being a name, is an acronym too. It’s supposed to stand for The Regolith and Ice Drill for Exploring New Terrain, which kind of spoils all the mystery about its mission – a tool meant to help find ice and other resources by digging into the Moon.

It is needed because this time NASA does not plan to send all the resources future Artemis missions will need from Earth, but when things really get going up there, plans to make full use of a concept called In-Situ Resource Utilization (ISRU) – and ice will be an important commodity for astronauts.

Just like the ALSD, Trident is a rotary percussive drill, but unlike its ancestor, it does not need humans to operate it. It weighs 16 kg (35 pounds), and should be capable of digging a hole 1 meter deep (3.3 feet) in 10 cm (4-inch) bites – this approach allows for a more accurate determination of how deep substances of interest can be found in the soil.

The hardware can, according to its maker, “capture and evaluate volatile species, including water, from cryogenic solids located within the top meter of lunar regolith.” The collected samples are transferred to what is called an oven, “where the water bakes off and can be captured for further use.”

The first time a version of the drill will be deployed on the Moon will be during the Polar Resources Ice Mining Experiment-1 (PRIME-1) mission, set to depart at a yet undetermined date (but before the first Artemis mission gets to the Moon in 2024), as an ISRU demonstration on the satellite.

Then, the drill will once again make the trip as part of the Volatiles Investigating Polar Exploration Rover (VIPER), heading for the South Pole of the Moon in 2023.

For now, there is no mention as to what Artemis mission will get to use it. 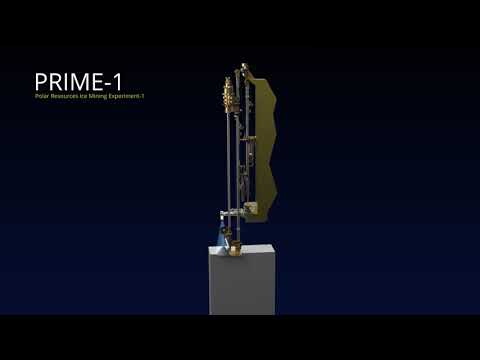