5 Honda S2000 Civic Type R: Why the VTEC Turbo Would Make a Good Sports Car
Up Next

Dragos Chitulescu
Here's a shower thought for you: how do you think a person that lived in the early 1900s would react if they were suddenly transported to the present day? How would they deal with the developments in technology, the degradation of society, the changes in global climate, and so on so forth? Would they quickly lose their sanity or would they manage to adapt? These are the questions we're faced with when seeing some of the insane projects that are being built these days.
9 photos

We've said it before and we'll say it again. Nobody wants to see the same old, boring, stereotypical builds anymore. Your car can be the epitome of performance and efficiency, but that doesn't mean it's going to draw in a crowd. Meanwhile, cars like the Goodwood Festival of Speed record-breaking McMurtry are making headlines in online media for days in a row now.

And the same goes for other companies including Delage, Rimac, and Koenigsegg. Of course, if you don't have that kind of budget to spend, you can still rely on your creativity to take you places.

And that's how multiple exciting projects have popped up around the globe. Just think of the Rolls-Royce-powered Ford Crown Victoria, the Lamborghini Jumpacan, or the drift-spec McLaren GT3 car from Japan. Of course, how could we forget about our boost-addicted buddy from Canada?

In the early part of 2021, Kyle was tinkering around with the famous LS-Swapped Ford Mustang that had eight turbos attached to it. That car has gone through a few changes since, but it's still in his garage.

He even tried building a seriously-fast pit trike, but that's not what raised our interest this time. Before the Mustang was built, he had experienced a multiple-turbo setup on his old Honda Civic. When he first bought the car, it was still running on a naturally aspirated setup. But he quickly realized that the engine had forged pistons and rods inside.

Seeing that setup would have allowed for more power, he decided it was time for an upgrade. And so he opted for a quad-turbo setup. One turbo for each cylinder makes sense right? The B16A2 engine looked and sounded cool, but only made 411 wheel horsepower.

It couldn't hit more than 20 PSI (1.37 Bar), and the turbo lag was terrible. By moving to a compound set-up with just three turbos, spooling at 6,000 rpm is just a distant memory. The party now starts at just under 4,000 rpm, giving Kyle a much broader and usable powerband.

The way the compound setup works is that the two K03 turbos spool up first, and they feed a much larger GT35 turbo. Right now, Kyle is still testing out the setup, so the boost is limited to 10 PSI. In his most recent video you can see a few burnout attempts, but nothing quite as crazy as we saw with the Mustang.

Weighing in at about 2,400 lbs (1,088 kg), this car should be quite fast once everything is dialed in as it should be. It's up to Kyle if this Civic is going to become a 10-second car or if it's just going to be another Internet project that's only meant to be fun. 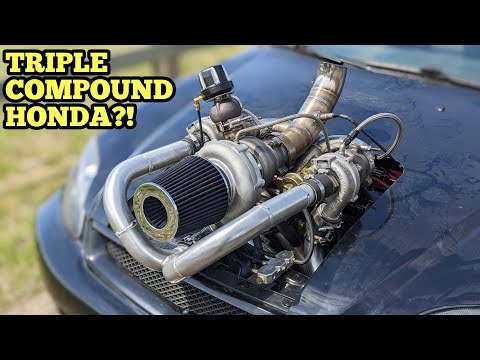