1 Marin Steps Up Its e-MTB Game With a Steel Stallion, but Is It Worth Over $4k?

3 What Do You Know! Haro Is Still Going Strong, Introduces 2021 Shift Plus e-MTB

5 Trek’s $11k Rail 9.9 XTR Proves That Not All e-Bikes Are Created Equal
Car video reviews:
Up Next

Everyone seems to want an e-bike, but seeing as some cost over $10,000, most of us can’t even begin to think of touching one. Think again.

Trek Blows Away Overpriced e-MTBs With the Rather Affordable 2021 Rail 9.7

What you see in these photos is one of the freshest, meanest, and affordable e-MTBs around, the Rail 9.7 from Trek. Yes, the same Trek that is responsible for 12-grand e-MTBs also includes less expensive brethren in the family. How much less? Nearly $5k less. This puts the 9.7 at just a penny under seven grand ($6,999.99) for the most decked out version.

Just imagine the happiness in me when I found out that I, too, can now rock with my e-MTB buddies. And not only that; I'll be doing it with a renowned bike using top-shelf components, one of which is the frame.

Speaking of frames, for the 9.7 this component is one of the main reasons for the price. An OCLV Mountain Carbon frame is readily equipped with a removable integrated battery, internal cable routing, Trek’s Motor Armor, and the famed Knock Block system.

Never heard of Knock Block? To make things simple and easy to understand, this system keeps your handlebars and fork from spinning round in case you biffed it on that last drop. This stops the fork from causing any damage to your frame and your cables from getting ripped out.

Since we’re on the subject of forks, let’s look at the suspension of this fairly-priced behemoth. That front fork I mentioned is a RockShox Yari RC that covers a full 160mm (6.3 in) of travel. That's as solid as its nearly twice-priced family members. For the rear, we find another RockShox system, this time a Deluxe Select+ with 230x57.5 mm (9.05x2.26 in) of coverage.

Now, the more important aspects of any e-bike are obviously the motor and battery system. Take a wild guess at what powerhouse supplies the motor. Yes, it's none other than Bosch. The Performance CX motor with a magnesium body runs under 250W, and just like most other motors on the market, it too has a max assist cap at 20 mph (32 kph). Oh, how much power does it put out? A pounding 85 Nm (63 lb-ft) of torque. Yeah, that’ll do it for just about anything smaller than K2.

For the battery system, Bosch offers the biggest and best power assembly it has, the PowerTube 625. Exactly how far this juice box will run you is hard to say as road conditions greatly vary from one ride to the next. But, based on previous PowerTube experiences, I feel it’s safe to say that you're covered for 60 miles (96 km) or so. Heck, why not grab another battery with you and toss it in your bag in case you’re that hardcore a rider?

Surprisingly, the rest of the drivetrain is covered by SRAM, with everthing tuned to the sounds of a 12-speed Eagle cassette. The shifter, derailleur, crank, and chain are all SRAM. The only Shimano components are the brakes with 4-piston hydraulics clamping down on 6-bolt 203-mm (8-in) rotors.

With the remaining components being a near-full Bontrager lineup, the entire bike comes in with a weight of just 50.2 lbs (22.8 kg) for the medium-sized frame. Personally, with the components this pretty penny showcases, if I had $7k to spare, this would be the first thing I'd get for my spring break. 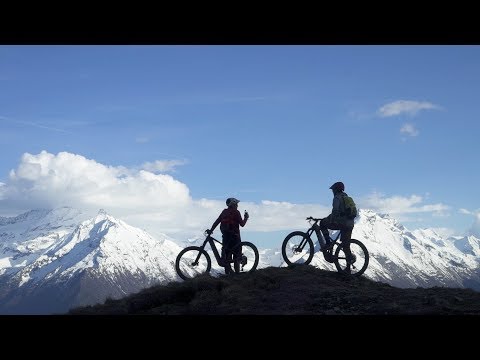