4 After Months Out of the Spotlight, Travis Scott Drives Around in His Ferrari SF90 Stradale

5 Travis Scott Wins VMA With a Video Filled With JDM Cars
Car video reviews:
Up Next

Even in showbiz, where exposure is vital, there are cases when the extra attention is not welcome. This is one such case: Travis Scott and his presumably-recent purchase of a brand new Bugatti.
16 photos

Last week, word got out that known car collector, rapper, designer and businessman Travis Scott had treated himself to a new $5.5 million Bugatti Chiron Pur Sport. The report originated from his most recent outing: a visit to his studio, at the wheel of the rare exotic. Video of that is available below, and Scott also posted a short video on his social media from inside the vehicle, showing off its blue color theme.

Any living human would be right to want to show off if they got a 1-of-30, super-expensive car, so that wasn’t the problem with Scott. The issue was that he was – and is – on the hook for a $750 million lawsuit over the Astroworld tragedy from last year. Scott organized and performed at the music event, which resulted in 10 people dying in a crowd surge. The victims’ families accuse him of foregoing basic safety measures that would have prevented an incident like this.

In other words, treating himself to a multi-million car when he still had not owned up to his share of the blame in the tragedy was heartless, at best. One attorney tells celebrity publication TMZ that the tragedy could have been prevented if Scott had spent just half of the money he spent on the Bugatti on “simple safety measures.”

Scott’s own attorney is fighting back the suggestion, but with a surprising argument: the car isn’t even new. He says Scott bought it in 2020, so bringing it up now and claiming it’s a new purchase is nothing short of image manipulation. So, the Bugatti is now at the center of a very public dispute, and fans are taking sides.

Regardless of how old the Chiron is, here is the video of Scott arriving at and departing from the studio in it. It turns out even someone as used to expensive cars as he must rely on the extra help to ensure its integrity: as he’s trying to drive off, he honks to alert the bodyguard and sends him to the rear to stop traffic for a few seconds as he pulls into the lane. 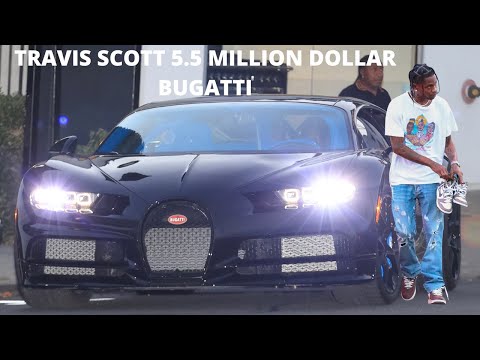 Editor's note: The Bugatti Chiron Super Sport 300+ is shown in the gallery.