1 Transformers: Dark of the Moon Teaser

4 Topless Chevrolet Stingray in Transformers 3
Car video reviews:
Up Next 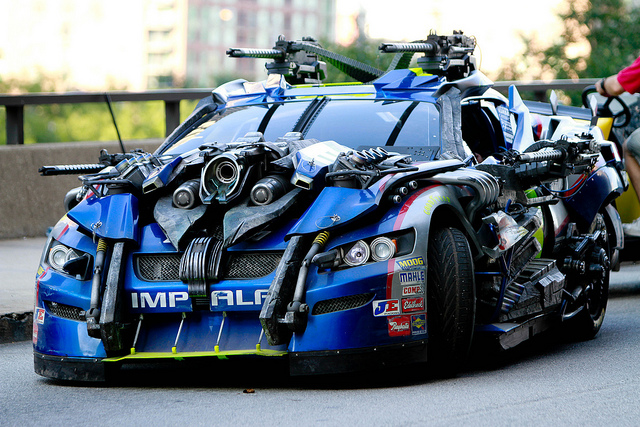 Every time there’s a new Transformers film coming up, Michael Bay tries his best to keep as much as possible under wraps, but with so many fans all around the world, that’s clearly impossible. With the third installment of the saga a few weeks away from its cinema debut, pictures have surfaced on the Internet of three newcomers and what is believed to be Megatron’s new skin.

It was first believed that this NASCAR trio would be Decepticons, the Stunticons, but some recent sources said they are Autobots, The Wreckers, an Elite Autobots Commando unit created only in the comics. The three cars are based on the racing version of the Chevy Impala and sport red, blue and green color combinations.

The Stunticons are a group of Decepticons feared for their psychotic behavior and their capability to do death-defying vehicular stunts and wreak havoc on the streets. They combine to form a powerful giant robot called Menasor. However the colors seem to bright for the menacing villains of the movie. The Wreckers were first seen in the Target: 2006 arc (originally printed in UK) and appeared in many of writer Simon Furman’s subsequent stories.

The second new vehicle to appear in the movie was shot alongside other known characters. It looks like an 18-wheeler truck straight out of a Mad Max movie. This is rumored to be Megatron’s new look for Transformers 3. Fueling the speculations is a Hasbro TF3 toy that reveals Megatron in robot form with a beat-up face, the result of battles in the last film. Making the villainous character a truck might bring a bit more balance to the movie, as the flying version in the first movie and the tank version in the second one looked too strong compared to the old Optimus Prime truck.