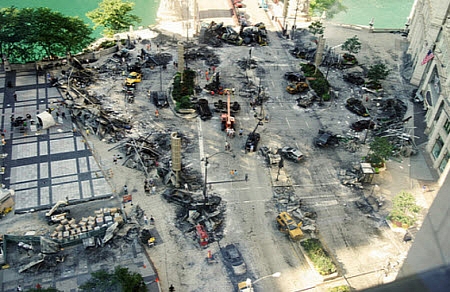 Last week's filming accident which put an end to Transformers 3 being shot on location in Chicago is just beginning to cause some type of reaction from the studio which produces the film, Paramount.

As we reported this weekend,  24-year old Gabriela V. Cedillo was seriously hurt last Wednesday as she performed a stunt on the Transformers 3 set. The woman was driving a car, which at the time was being towed down the Cline Avenue Bridge extension, when the towing cable between the two cars snapped and hit the woman in the head.

This was, at least, the story as reported by witness and backed by police, because now Paramount, unofficially for now, begs to differ. According to DeadLine, Paramount is looking at the whole thing as to a “freak accident” which did not take place during the stunt.

According to the studio sources, the stunt itself was taking place some 500 feet (150 meters) away from where the woman and her car were located. Even more, it appears it was not the towing cable which injured her, but a “flying metal object whose welding had come apart.”

“We feel horrible that anyone was injured and will take all appropriate action," a studio executive was quoted as saying by DeadLine.

Whatever was that happened, the woman was admitted to hospital and placed in a medically induced coma at Loyola University Medical Center in Maywood, Illinois.

The accident is being investigated by the Indiana Occupational Safety and Health Administration, while the two cars involved in the accident were impounded.