5 Artists Creates Transformers Bumblebee with Unusual Paint Job
Up Next 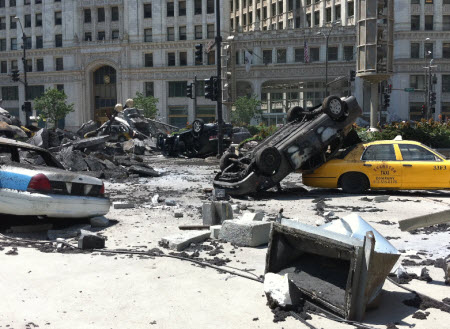 There is little under a year left before the third installment of the Transformers franchise hits the cinema screens in both 2 and 3D modes, and the shooting of the movie moves ahead with disastrous consequences. For the in-movie cars, that is.

This month, Michael Bay and his team have been in Chicago, accompanied by an amazing display of super, extra, mega and trashed cars. Fire, guns being fired, insane stuntmen being parachuted over the city, a deafening array of sounds and, the cherry on the cake, dozens of cars trashed on the streets of the Windy City.

There's no number as to how many cars were destroyed in the scenes shot last week, but the images speak for themselves. Judging by the photos and some of the promises Bay made since filming began, we are in for possibly the best Transformers movie yet. Even if (or maybe because) there will be no Megan Fox in sight.

According to what is known so far, the new movie deepens the ties the Transformers have with our planet and its history. Bay will take us into the dark corners of the USSR-US cold war, where apparently a hidden Transformer lurked and directed the space race between the two superpowers.

Sad news is that the 3rd might be also the last Transformer movie. A trilogy finale, the new movie is likely to kill the franchise for good, but, at least, we'll have a killer ending as well.

"As a trilogy, it really ends. It could be rebooted again, but I think it has a really killer ending,” Bay was quoted as saying by slashfilm.com.