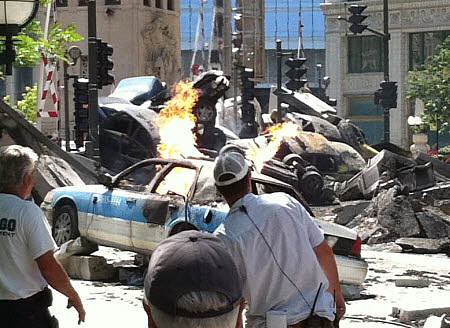 Having to film a movie in set filled with machines, sharp objects, explosions and falling debris is quite a dangerous business, but apparently that's not the only hazard to be found in such a location.

This Wednesday, 24-year old Gabriela V. Cedillo was seriously injured in a car-related accident on the set and remains hospitalized in a medically induced coma at Loyola University Medical Center in Maywood, Illinois.

According to witness of the crash, Cedillo, who is a a bank teller from Chicago, was behind the wheel of her car, which at the time was being towed down the Cline Avenue Bridge extension.

At one point, the towing cable between the two cars snapped, swirled back, went through the windshield of the car and hit the woman in the head. Local online publication nwitimes.com reports that after this happened, Cedillo's car rolled for an extra mile before coming to a stop.

The accident is being investigated by the Indiana Occupational Safety and Health Administration, while the two cars involved in the accident were impounded.

The director of the movie, Michael Bay, did not make any comments, but the production company behind the movie released a statement saying "our thoughts and prayers are with Gabriela, her family and loved ones."

As a result of the incident, shooting of the last scenes at Millennium Park was at first postponed, but reports now claim the filming has been canceled altogether. Apparently, the scenes already shot are enough.

"Transformers has completed their filming in Chicago," Richard Moskal, director of the Chicago Film Office in the Mayor's Office of Special Events was quoted as saying by the Los Angeles Times. "The filming that was canceled was not rescheduled."