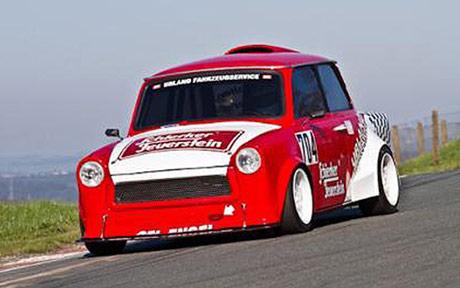 The Trabant is an East German automobile that entered production in the late 50s and used a smoky two-stroke engine. The low-cost vehicle offered poor performance and thus became the subject on an infinite number of jokes.

However, it seems now all that has come to an end, as a modified example of the cat managed the achieve a top speed of no less than 146 mph (235 km/h), as telegraph.co.uk reports.

The feat was achieved at the Rothenburger Airport in Germany and beat the previous Trabant top speed record of 125 mph (201 km/h), managing to become a Guinness Word Record. We’ll remind you that the original version of the car had a top speed of 70 mph (113 km/h).

The now-famous vehicle, which uses a heavily modified engine, was tuned by brothers Maik and Ronny Urland. The car also comes with a lowered suspension and a custom bodykit that includes modified front and rear fascias, a front splitter, wider wings, as well as an air scoop mounted on the roof. Other modifications include new exterior mirrors, which are small, in order to create less drag and a set of racing rims that use high-performance tires, which offer a high level of grip.

The project was created to celebrate the 20th anniversary of the falling of the Berlin Wall, an event which brought East and West Germany together.

However, this is not the only project of its kind, as the Trabant has become a cult vehicle ever since its production was halted back in 1991.