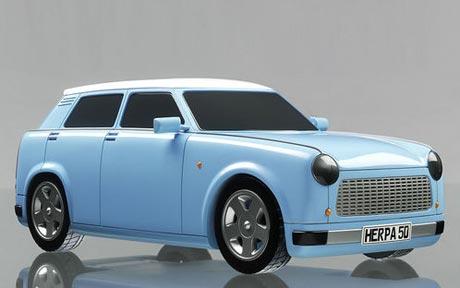 The rebirth of Trabant will probably make some smile with nostalgia and others to burst into laughter. Well, German automaker Herpa has just announced that the 2012 model is set to debut at the Frankfurt Motor Show next month, taking everybody by surprise and revealing that the future Trabant will be an electric car.

Though it is still in a concept stage, the 2012 Trabant will reportedly keep the lines of the original model that entered production in 1957 and will come in a four-door hatchback body style, telegraph.co.uk informs. Unfortunately, we have some bad news for all “Trabi” fans that used to enjoy the sound of its clattery 37cc two-stroke engine powered by a 6.5 capacity tank that was located under the bonnet.

The new model, called Trabant nT, will by powered by the solar panels on the roof, so the noise will no longer be a defining feature. The nT will also have a petrol tank in case of emergencies and will be able to go for a little over 150 miles (250 km) before recharging.

Taking the preliminary data revealed by the manufacturer, we can say the future Trabant is destined for success. The old Trabant could reach an “impressive” speed of 55mph (88.5kph) downhill, while the nT is designed to hit speeds of 75mph... on level surfaces. The new model is with about six inches longer and wider than its predecessor.

Compared with the old model that would have been classed as a luxury model if it had a fog lamp at the rear, the nT will feature i-Pod player, telephone and a navigation system inside. The electric car will be displayed in Frankfurt in blue, but the manufacturer says that the production model will sale in a wide range of colors.