4 Swift and Micra Get Tested by EuroNCAP, No Five Stars In Standard Trim

Ever since the introduction of the EuroNCAP - or, better yet, ever since the consumers started paying attention to its ratings - some manufacturers started building and equipping their cars in ways that would ensure a maximum score in the tests. That led to cars scoring higher than others even though they were just as safe in case of an actual crash simply because of some irrelevant gimmick.

The scoring system changed over the years and some new tests were introduced, but the entire process was in need of an overhaul. To stay relevant, it needed to keep up with the technological advancements present in today's cars, and we all know how quickly those tend to evolve.

For 2020, the most important updates are linked to the introduction of a moving barrier test which replaces the 23-year-old offset deformable barrier test. The side impact test has also received some tweaks, but more importantly, EuroNCAP will now give points based on post-crash evaluations of the vehicle - for instance, how easy it is for the rescue services to access the people inside.

The Toyota Yaris was the first model to be evaluated based on the new protocol, and the little Japanese hatchback passed with full marks. The overall safety rating for adult occupants was 81%, with the biggest problems arising in the new mobile progressive deformable barrier test where both the driver and front passenger recorded only marginal protection for some parts of their bodies (knees and femurs for both, torso and feet for the driver). Other than that, the Yaris only offered "good" or "adequate" protection for its adult occupants.

Child protection is near-perfect with 23 out of 24 points, the overall score of just 81% being so low due to the absence of Isofix and i-Size mounting points for some of the seats. Finally, the Yaris is also quite friendly toward pedestrians with a score of 78% and minimal chances of severe injuries across its entire front end. You can take your daily dose of cruelty against small hatchbacks by watching the clip of the EuroNCAP tests below. 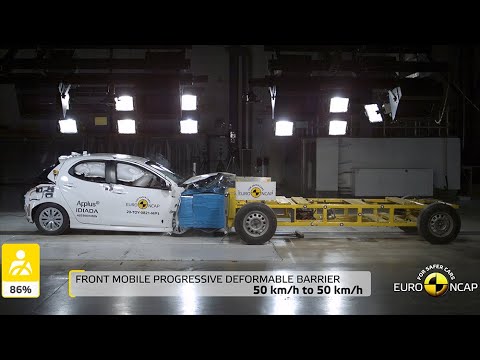