3 Future Toyota Supra Could Cost More than a Corvette

Toyota Supra Owners Meeting in Dubai Is Not that Different

Home > News > Tuning
Gabriel Brindusescu
You’re probably thinking that traffic in Dubai is made up of mostly supercars and diamond-studded four-wheelers. Well, sorry to burst your bubble, but there are less expensive cars around there too. Like lots of Toyotas including even some Supra models.
1 photo
Stop thinking about Supras wrapped in gold foil already! These are normal Supras, OK? They might have tuned engines and a few exterior mods, but they look exactly like those driven anywhere else. Even some of those rarer targa models too.

How do we know? There was a recent Toyota Supra owners meeting and ride across Dubai recently and Youtube user Patrick3331 was there to film most of the action as you’ll se in the video below.

Of course, none of those things happening at your usual TX2K took place here. You know, the police has a whole arsenal of fast cars to pursue these guys if they wish to. They recently bought a Lexus RC F to join the rest of the stable. They said they’re using them only for patrol, but I’m sure they could let one loose and chase racers at some point.

Highway racing or not, we’re happy to see people here interested in Supras as well and we’d love to see the community growing a bit more. We only counted about 8 cars in the clip... 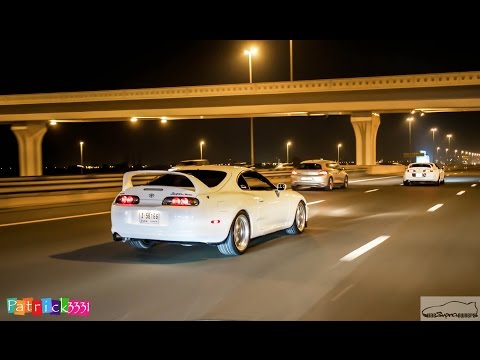