4 2JZ-Powered Toyota Supra Blasts Through the Quarter-Mile in 6.4 seconds

Ever since the all-new Supra's debut, the value of classic Mk4 models has gone up. Interest is high, not only in custom-modified examples but also stock ones that let you sample what it was like to buy a Japanese sports car in the 1990s. Here is something in between, a super-rare example that looks like it's been tastefully tuned.
10 photos

Mat Watson usually reviews brand new cars for Carwow, and the old ones he does try tend to be German. But in 2019, he reviewed three Mk4 Supras, and that video is pushing 3.5 million views. So it's safe to say the YouTube viewers wanted more, and he got a TRD special as a result.

Now, TRD is a household name in the Supra community. Literally every Mk4 owner owns or at least knows about that TRD wing, but this particular car is still a bit of a mystery. Japan has a racing series called the JGTC, and to celebrate the Supra's 1994 track debut, Toyota Racing Development made this road-legal version that was also dubbed the 3000GT.

It was based around the GT500 super-touring race car and had a similar widebody kit. That's why this Supra has a completely designed front bumper, fenders with extra vents, and some killer rear aero. This serious piece of kit also comes with a flattened floor to smooth out airflow and a vented hood to cool the powerful engine.

Or at least that's what the internet says because this doesn't look stock. We did a bit of searching and found the very car in this video (it was white last year) supposedly making 600 horsepower. The one in Mat's hands makes 700 hp from its built 2JZ and sports the iconic Advan racing livery. With all that power, it's probably a good thing that the brakes have been upgraded to an 8-piston setup at the front.

According to the video, only 35 of these were ever made, of which 19 survive to this day. The owner has fitted his unit with custom tail lights, a carbon diffuser, and GReddy exhaust, along with some tasteful Volks 6-spoke wheels.

The interior is arguably more tasteful than the outside of the car, bordering on premium. There's no cracked dash and dirty seats here, as this Supra has been treated to some Alcantara wrapping, carbon fiber trim, and an Alpine stereo with 1000 Watts of juice behind it. It's a 1990s sports car, so don't judge. 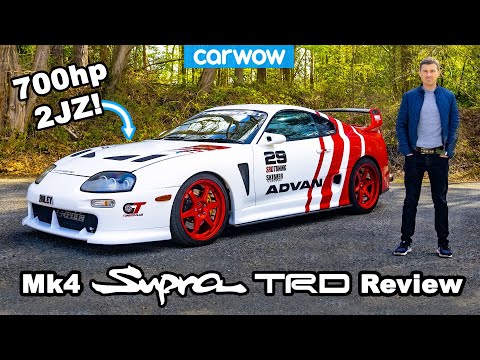