5 This Supra Can Drift by Itself, Artificial Intelligence Learns From Pro Drifters
Car video reviews:
Coverstory

Too much time is spent talking about why the Supra is a BMW in drag. What we really should be discussing in regard to the "real Japanese sports car" topic is the price of this thing. With options and markups, you could be looking at $55,000. And most of the attention-grabbing models on social media are pushing $100,000 because of the upgrades.
22 photos

And so it's actually not that far off from where an Audi R8 V8 used to be back in 2014. It's not the kind of affordable sports car Japanese companies used to make, which had a simple engine that lasted forever, a simple gearbox, and just supplied you with affordable fun.

But instead of focusing on the negatives, we'd just let the Mk5 Supra embrace its expensive sportscar looks with the most extreme rendering we've seen to date, one which looks fit for a manga-style Batman. Artist Hycade has a talent for bold widebody kits which still appear anchored in reality, and the Toyota was one of his latest targets.

The restyling of the car makes it look way more exotic, especially from the back, where we see exhaust tips that are stacked vertically, like on a Lexus IS F. The extra-deep front intakes are a lot like those of the original Supra concept, which undoubtedly looked more exotic. There's also a hint of the LFA's proportions, both the production car and the prototype of 2005.

Hycade also has a trademark element where he shows just how much bodywork has been added with large vertical vents connected to the headlights and taillights. It's a feature we found especially interesting on this widebody Audi RS6 and Golf R.

Speaking of which, the super-Supra would need more power to justify these looks. There have been rumors of a twin-turbo 3-liter being offered and the fake vents being built into the car precisely for this reason. But the power dome in this 3D model's hood is more reminiscent of the high-performance Lexus models with large displacements. 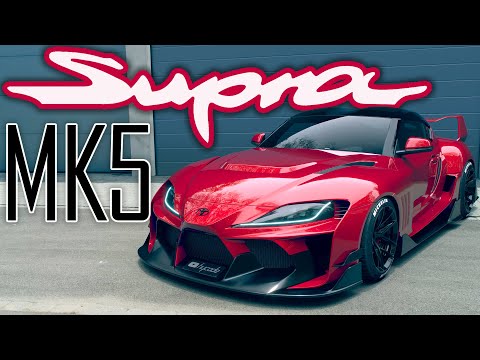