As you are making yourself comfortable for this upcoming weekend that happens to bring the Le Mans 24 Hours race, we started to search the history books for past glory days in motorsports for today' carmakers and stumbled upon Toyota's journey in Le Mans.
1 photo
When their TS040 Hybrid race prototype hits the track next Saturday in Le Mans, Toyota will celebrate 30 years since their first official participation in the race. To mark this occasion, the Japanese brand compiled a short film that takes us through the story of all their campaigns on French soil.

Since the mid-eighties, Toyota was involved in the motorsport celebration we call Le Mans as a manufacturer or supplying engines for the Dome and TOM's team. The brand entered 16 races where it obtained a mix of good and disappointing results, but never managed to pose a threat and secure the top spot.

For example, in 1985, the year Toyota made their first appearance in Le Mans, one of the two 85C prototypes abandoned the race due to a broken clutch, while the other racer (#36) managed to finish in the 12th position. It was the first time a Japanese car finished at the legendary Circuit de la Sarthe.

Both cars used a 2.1-liter four-cylinder turbocharged engine, but thirty years of evolution allowed Toyota to design and develop the TS040 Hybrid racer. It is powered by a 3.7-liter V8 assisted by an electric boost system for a grand total of over 1,000 horsepower, which finished third last year in Le Mans.

There's more to come in the video below, but we don't want to spoil the fun so click play and watch your general knowledge become richer: 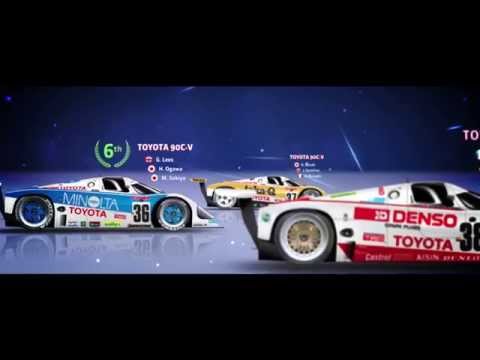