3 1995 Mazda RX-7 Grows an Attitude Along With a Mean Body Kit, Both Are Tiny

5 Matching Porsche 911 GT3 RS, Lambo Huracan Are the Ultimate Toys for the (Not) Crazy Rich
Car video reviews:
Up Next

Toyota RAV4 Goes Full Hill Climb Monster, If Only the Hill Were Real

Giant Japanese carmaker Toyota is a lot of things to a lot of people. For the industry as a whole, it’s the maker of some very sturdy and reliable machines, and it’s the one that more or less started the entire electric frenzy with the launch of the Prius all the way back in 1997.
13 photos

Three or so years before that, in 1994 on the markets in Japan and Europe, Toyota surprised the customer base with something some in the industry consider the first compact crossover: the RAV4. By 1996, the model was available in the U.S. as well, and a new path to success carved by the Japanese.

Selling from $26,975 and available in no less than 12 variants and trims, the RAV4 has a little bit to offer for anyone. What Toyota doesn’t offer is an official hill climb monster, although plenty of customers went down this path over the years.

Looking at the photos in the attached gallery, you’d be inclined to believe this is the latest RAV4 hill climb monstrosity, cooked up in a garage somewhere with the goal of taking on some insane roads. You’d be partially right, but those insane roads would have to be miniature ones, as that’s not a real Toyota.

What you’re looking at is a diecast conversion handled by a shop going by the name Jakarta Diecast Project. It’s not a Hot Wheel, as we’re used to seeing from this crew, but a Tomica, but that doesn’t make it any less spectacular.

We’re not going to go into the technical ramblings of the designer (V10, anyone?), given how this is a toy and all, but we can’t stop from admiring the end product and wish it were sitting in the corner of our desk. Especially given how there’s so little of the original RAV4 left… 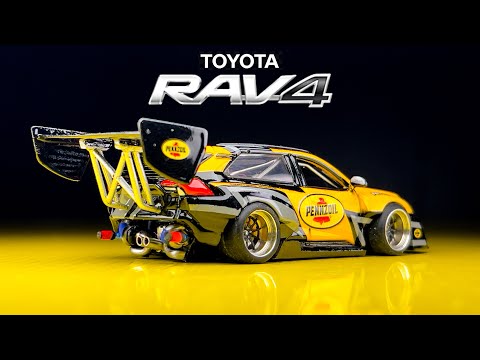