1 GTA V Player Performs Stunts with Every Type of Vehicle, This Is No Picnic

3 Faster Than an F1 Car, Airspeeder Flying Car Is Ready for Racing Series

Toyota Hilux Gets Dropped From 10,000 Ft., the Highest Level of Car Abuse Ever

Today’s never-ending quest for social media recognition and easy entertainment has led to numerous instances of cars, SUVs, and trucks being misused in the most innovative ways. Sometimes it was just for fun, and the vehicle didn’t suffer... other times it made any automotive aficionado cringe. But this video embedded below shows what is probably the highest level of car abuse ever. Quite literally.
32 photos

Apparently, during the past few weeks after the purchase of “the world’s most indestructible truck,” the host behind the WhistlinDiesel channel on YouTube has decided to put that statement to the challenge. In his own words, the goal was to find out if his 1989 Toyota Hilux really is “just as durable as Top Gear says (these trucks) are.”

Now it’s time for the fourth (and possibly the final) installment in the miniseries, and we have also embedded the previous episodes just so you can see the previous abuse and why the host thinks that so far, the answer to his durability inquiry is quite positive. But he now wants to push the challenge even further and find out if Hiluxes are even “more durable.”

Well, that’s why he reminds us of that one time when the TG crew dropped a Hilux from a 200-foot-tall building (that’s around 60 meters) and promises to dial up the stakes a few hundred times... with the help of a helicopter. First off, the pickup truck will incur a fall from “just” 500 feet (152.4 meters) and we can see the initial abuse take place from the 4:15 mark after some humorous or gloomy predictions.

With the Hilux strapped tightly to the heavy-lift helicopter (apparently, using it costs “$100k a minute”), the first drop comes from the 5:55 mark and one can see the dusty result at the 6:46 mark. It’s safe to say the pickup truck didn’t quite survive the ordeal in a shape that would allow driving it ever again... but that’s just the appetizer.

Immediately after they check out the wreck, the Hilux gets hooked once more for a “trip to heaven” as the helicopter goes up to around 10,000 feet (3,048 meters). Not the 15k feet (over 4,500 meters) he mentioned in the presentation but still enough for the chase helicopter to remain way below because it actually can’t reach that height!

The second free fall comes exactly at the 8:36 mark and it’s long enough for the onboard camera to shut down (it still survives the fall, though) all by itself as the truck probably reached terminal velocity. The drop from that height takes no less than 29 seconds and the aftermath... isn’t pretty at all, to put it mildly! 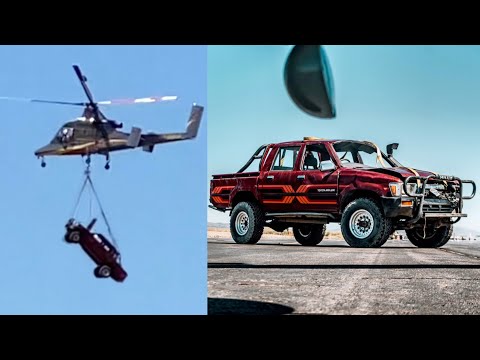 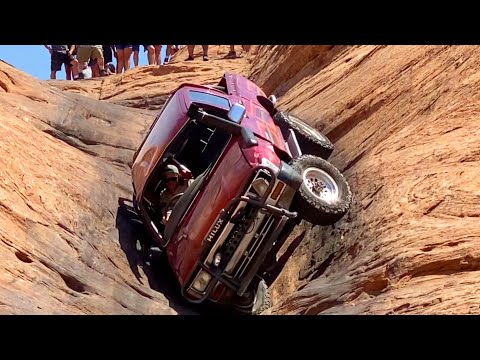 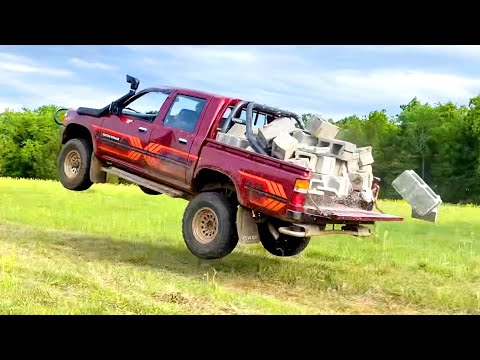