5 Trombone Miata Uses the Instrument as Sport Exhaust, Sounds Cool
Up Next

Toyota GT86 Versus the new Mazda MX-5 on the Track: What's Your Choice? – Video

Gabriel Nica
Back in the day, when the original MX-5 was launched, the Toyota GT86 was not even on the radar and nobody even thought about bringing such a car to the market back in Nagoya.
1 photo
However, the success of the Miata also became its Nemesis over the years. Seeing just how successful the car turned out to be, more and more manufacturers started thinking about making light, uncomplicated rear-wheel drive cars that would be cheap and fun to drive.

What I’m trying to say, I guess, is the fact that the birth of the Toyota GT86 was probably determined by the success of the MX-5 and, today, we’re looking at the two entangled in one of the fiercest battles the industry has to offer.

Unlike in the case of other long-lasting rivalries, such as the M3 against the C63 AMG for example, or the M5 against the E63, this one is taken to a whole new level. Why? Because the MX-5 and the GT86 are a lot more affordable, leading to bigger communities to bicker about each other’s choices.

The guys from Evo took the two out for a spin on the track, to find out two things: which one is more fun and which one is faster.

The specs will tell you that the Mazda is lighter on its feet by some 200 kilos (441 lbs), a rather big difference considering that the Toyota it’s going up against should’ve been a light car too in the first place. On the other hand, the horsepower advantage goes to the GT86 by a whole 40 HP. That might not seem like a lot but when we’re dealing with under 200 HP, it’s plenty.

So, will the extra horsepower be enough to compensate for the extra weight? In short: no. Even though it has more grunt coming in from under the bonnet, the Toyobaru was marginally slower than the Mazda. However, it should be mentioned that the stock tires were chosen by the engineers behind the GT86 in order to have less grip than recommended, to allow drivers to have more fun. A simple change of tires would probably do a lot in terms of performance.

At the same time, do we need to mention that the Miata is a convertible? That’s a big plus if you ask us, not to mention that it’s also cheaper in the first place. What would be your choice? 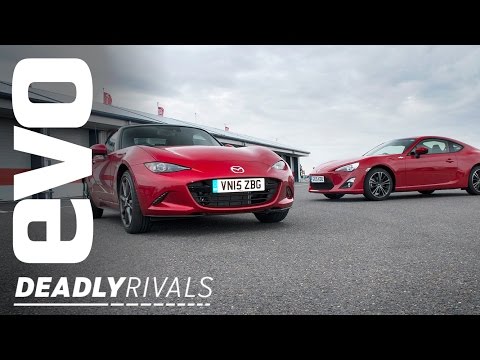