The hot hatch segment has always been a powder keg of the automotive industry. Just when you think you have a pretty clear hierarchy, one manufacturer somehow finds a way to launch a new model that instantly upsets things at the top.
6 photos

Even so, for years, the recipe has been pretty predictable: four-cylinder engine (usually two-liter, but variations were accepted) with a turbocharger, front-wheel-drive, and manual transmission. After all, a good hot hatch has to be quick, but it also needs to remain affordable, so simplicity was key.

These days, though, you get all sorts of powertrain combinations, and all-wheel-drive has almost become more common than FWD. If there ever was a group of cars that could highlight the growing discrepancies between every automaker's solutions, it has to be the one in this three-way drag race.

First up, we have the Toyota GR Yaris. The little Japanese hatch has won everyone who's ever driven it over and is regarded by many as the best current embodiment of what a hot hatch should stand for. The way it achieves that, however, isn't exactly conventional. It uses a three-cylinder 1.6-liter turbocharged engine with 261 PS (257 hp) and a hefty amount of torque (266 lb-ft/360 Nm) sent to all four wheels through a six-speed manual transmission.

The only thing the second contestant has in common with the GR Yaris is the manual transmission. Other than that, the two-liter four-cylinder turbo in the Honda Civic Type-R only powers the front wheels, putting a lot of stress on that axle with the 320 PS (315 hp) and 295 lb-ft (400 Nm) it develops. It's definitely not the ideal configuration for drag racing, but, as we'll soon see, it's all about context.

Finally, we have the MINI John Cooper Works GP, the only car here that breaks the Japanese monopoly and does it with a fair chance of winning the contest. Like the Honda, the JCW GP also has a two-liter four-cylinder turbo, except here it produces 306 PS (302 hp) and 332 lb-ft (450 Nm) of torque. It too doesn't have an AWD system, sending power to the front wheels instead, but where it differs the most from the Type-R is in its eight-speed automatic transmission.

So, we have three very different ways of building a hot hatch, all gathered on the same track with only one goal in mind: to be the first to cross that finish line. Unfortunately, we can't tell you the distance over which the three hatches raced, but if we were to guess, we'd say it's half a mile. Make it a quarter-mile, and the result would look a lot different. 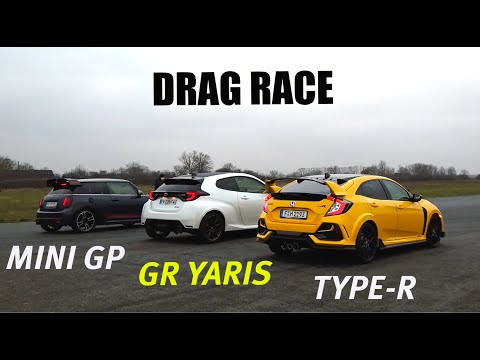