The Audi RS Q8 should have absolutely no problem beating a Toyota GR Yaris in a drag battle, right? Actually, that would be a big no, because the ultracool hot hatch is not only fun on twisty roads, thanks to the bespoke suspension, all-wheel drive, and other mods, but also very quick in a straight line.
6 photos

Arguably one of the best cars in the segment, the GR Yaris doesn’t seem that exciting when looking at the specs. It packs a modest three-banger under the hood, with a 1.6-liter displacement and forced induction, rated at 257 hp and 266 lb-ft (360 Nm) of torque.

The European model can hit the 62 mph (100 kph) mark in less than 5.5 seconds, and can top out at 143 mph (230 kph). The Japanese variant, which uses the same mix, complete with the six-speed manual gearbox, is a bit punchier. It boasts 268 hp and 273 lb-ft (370 Nm). Enhancing it is the optional Circuit Pack, with its front and rear Torsen limited-slip differentials, performance-tuned suspension, and 18-inch alloys wrapped in sticky tires from Michelin.

It’s more than obvious which one holds the upper ground, but would it be safe to bet on the RS Q8 as it goes to half-mile war with the GR Yaris? You are about to find out, and you’ll also see this true pocket rocket take on a Porsche 911 Turbo and a BMW M3. 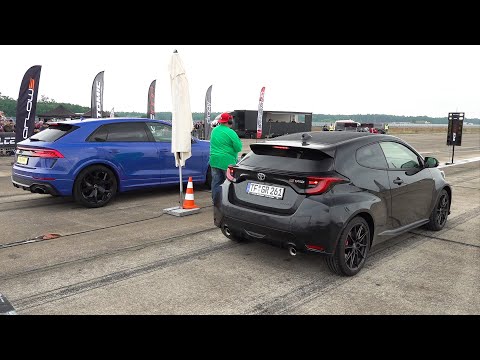