4 Ford F-150 vs. Toyota Tundra vs. Ram TRX: Which One Is The Quickest Tow Truck?

FCA’s fabulous Hellcat family comprises all sorts of rides, from the Challenger muscle car to the Jeep Grand Cherokee Trackhawk, which was built to give the Lamborghini Urus a serious run for its money. It also includes a proper workhorse that doubles as a decent drag car, namely the Ram 1500 TRX.
6 photos

It was the super truck that became the focus of the camera lens in the video embedded at the bottom of the page, together with the new generation Toyota Supra, as the two different rides went to quarter-mile war.

You might argue that there’s no chance in hell that the Ram 1500 TRX can beat a sports car like the latest GR Supra, but on paper, you’re looking at a little over 12 seconds needed to complete the run. In not-so-perfect weather conditions, and with someone who’s not entirely familiar with it, it will do more than 13 seconds, as we’ve found out over the years. That is definitely not bad at all, considering that it weighs as much as a small shed and that it’s not exactly the most aerodynamic vehicle out there.

It rocks a supercharged 6.2-liter HEMI V8 engine, with 702 hp and 650 pound-feet (881 Nm) of torque bouncing off the walls. The mill, hooked up to an eight-speed automatic transmission and four-wheel drive, rockets it to 60 mph (97 kph) in 4.5 seconds. Top speed, on the other hand, is not that impressive, as it will ‘only’ do 118 mph (190 kph), though there aren’t many places on Earth where one can legally and safely hit it.

As for the GR Supra, it is offered with a 2.0- and a 3.0-liter engine in the United States, rated at 255 and 382 hp respectively. Both are mated to an eight-speed automatic transmission and rear-wheel drive, and with the latter unit, you’re looking at 3.9 seconds needed to sprint to 60 mph (97 kph) from a standstill. 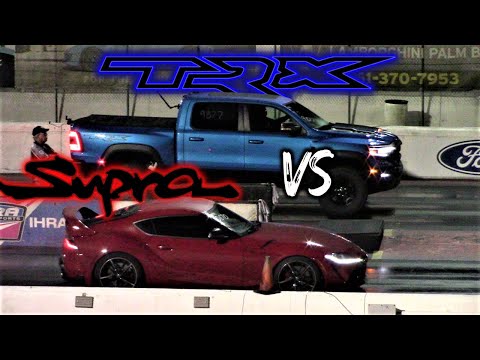