They say that Toyota’s fifth-generation GR Supra is just an Austria-built BMW in disguise. But that does not mean it lacks any fans or the core strength of the series. Besides, others were even simpler rebadges...
26 photos

There has been a lot of back and forth between diehard Supra fans and enthusiasts who did not mind it has the heart of a G29 BMW Z4. Frankly, everyone should be more inclusive, and the world might turn into a better place. We all know it needs a little more love in these times of heartache and distress instead of one crisis and war after another.

So, here is the perfect example of a menacing, all-black Toyota GR Supra doing the best possible thing to reclaim the respect of motorsport naysayers: spectacular quarter-mile passes. The videographer behind the Drag Racing and Car Stuff channel on YouTube gives us what could have been a traditional case of America vs. Import in this video embedded below (posted on March 10th, 2022).

The murdered-out GR Supra lined up one sunny day at the Rockingham Dragway in Rockingham, North Carolina, against a burgundy Ford Mustang GT. Any Blue Oval fans might want to look away from this one. As such, the Euro-built JDM hero did not mind trampling on the legendary dragstrip heritage with a 10.67s victory against a 12.86s pass.

And it turns out the driver did not even stress his ride too much on this one. However, a different approach was needed for the next skirmish against a mean-looking crimson-and-black Pontiac G8. Itself a connoisseur of rebadged woes (G8s were made by Holden in Australia based on the VE Commodore), this sedan looked ready to put up a fight.

That meant the GR Supra had to give it all out. And it did, nailing a much improved 9.9s pass against the opponent's quick (but not quick enough) 10.58s pass. 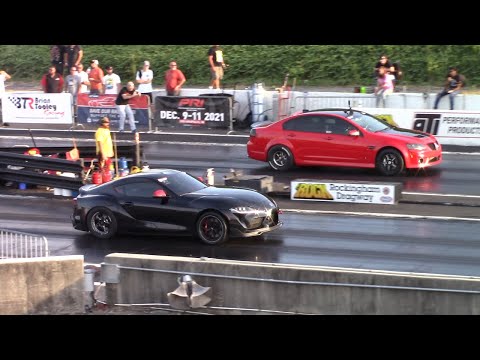