4 BMW M140i Sleeper Goes Like Stink, Surprises the Exoticness Out of a Ferrari 488 Pista

The Toyota GR Supra will be celebrating its fourth anniversary in about six months from now. And still, some people disregard it for using technology developed by BMW. Sure, chances are that most of those people haven't driven a BMW or a Supra before, but that's just how they feel about the car. Today's drag race is a match-up between the GR Supra and an M140i, and it should be quite interesting to see how it unfolds.
13 photos

For someone with no knowledge of the automotive industry, these two cars might seem to be worlds apart. The GR Supra is a sleek, futuristic sports car built by a Japanese company. Meanwhile, the 1 Series is more of a luxurious hot hatchback developed by a German manufacturer.

At the heart of both cars, there's a BMW B58 unit, a 3.0-liter inline-six engine with a twin-scroll turbo attached to it. So it comes as no surprise that after a few mods they're also evenly matched at about 460 horsepower each.

But the Japanese sports car has the benefit of using 285/30/R20 ones in the rear, which might allow for better traction levels when going off the line. It also sounds slightly more aggressive, but that is mainly down to the Inconel exhaust system.

Right off the bat, it's clear that the M140i is suffering from excessive wheelspin as it struggles to keep it all together. Meanwhile, the GR Supra takes the lead and the scenario is unchanged for the next run as well.

Moving on to the rolling start format, the BMW uses its weight advantage to turn the tables in its favor. At this point, driver reaction is just as important as the setup of the car, so we get to see some very close runs before a winner is finally decided. 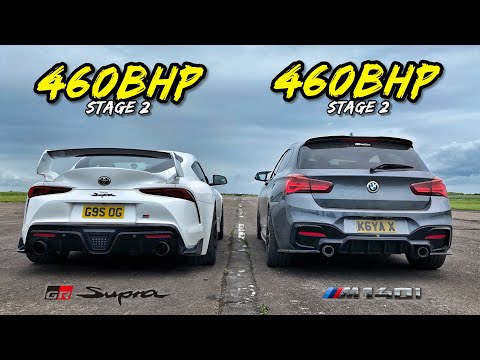